On January 11, a new cyber libel charge and arrest warrant were filed against Rappler CEO and founder Maria Ressa in the Philippines, marking the 10th arrest warrant Ressa has faced in under two years. International Center for Journalists (ICFJ) joined the #HoldTheLine Coalition in condemning the new case and calling for an end to pressure against Ressa and Rappler. 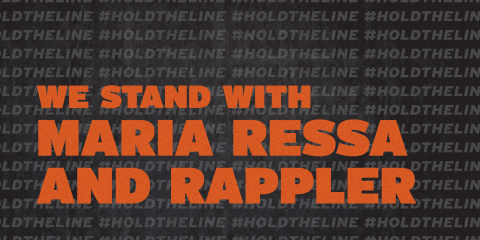 In reaction to the new cyber libel charge and arrest warrant brought against award-winning journalist Maria Ressa in the Philippines on January 11, the #HoldTheLine Coalition issued the following statement:

“The #HoldtheLine Coalition stands with Maria Ressa and Rappler as they stare down yet another criminal cyber libel charge amid escalating legal harassment in the Philippines. This state-enabled harassment campaign serves one purpose: to silence critical journalism aimed at holding power to account and exposing corruption,” said the steering committee.

“The abuse of the Philippine legal system to go after Maria Ressa and Rappler with spurious cyber libel charges further emphasises the need to scrap criminal libel and let the news media get back to its job of reporting on the global health pandemic and other issues of critical public interest.”

This latest move marks the third criminal cyber libel charge against Ressa, the last of which was filed less than two months ago, indicating an alarming new trend of the state exploiting the criminalization of libel in the Philippines.

The coalition of more than 80 groups led by the Committee to Protect Journalists (CPJ), the International Center for Journalists (ICFJ), and Reporters Without Borders (RSF) stands with Ressa to #HoldTheLine and defend independent journalism in the Philippines.

Sign and share the #HoldTheLine petition calling on the Philippine government to drop all charges against Ressa and Rappler.

Note: This statement is issued by the #HoldTheLine steering committee but it does not necessarily reflect the position of all or any individual Coalition members or organizations. For further details, contact Courtney Radsch (cradsch@cpj.org), Julie Posetti (jposetti@icfj.org), and Rebecca Vincent (rvincent@rsf.org).