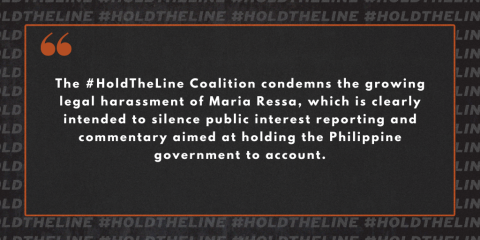 Ahead of another cluster of court proceedings against Rappler founder and CEO Maria Ressa, the #HoldTheLine coalition calls for an end to the escalating and incessant campaign of legal harassment against her in the Philippines.

“The #HoldTheLine Coalition condemns the growing legal harassment of Maria Ressa, which is clearly intended to silence public interest reporting and commentary aimed at holding the Philippine government to account. This cluster of hearings highlights the absurdity of the cases against her, which constitute legal abuse of a courageous independent journalist and the news outlet she founded. We stand with Maria Ressa and Rappler, and we call for the charges against them to be dropped and this unrelenting pressure brought to an end once and for all,” said the steering committee. 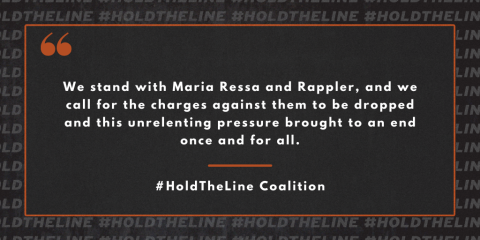 These are only the latest examples of escalating legal pressure on Ressa, who has been subjected to 10 arrest warrants over the past two years. She faces a possible six-year prison sentence if her cyber-libel conviction from July 2020 is not overturned, and two further cyber-libel charges have since been brought against her. Ressa could be looking at a lifetime in prison if convicted on all charges against her.

The #HoldTheLine coalition of more than 80 groups led by the Committee to Protect Journalists (CPJ), the International Center for Journalists (ICFJ), and Reporters Without Borders (RSF), stands with Ressa to #HoldTheLine and defend independent journalism in the Philippines.

Sign and share the #HoldTheLine petition calling on the Philippine government to drop all charges against Ressa and Rappler.

Note: This statement is issued by the #HoldTheLine steering committee but it does not necessarily reflect the position of all or any individual Coalition members or organizations. For further details, contact Courtney Radsch (cradsch@cpj.org), Julie Posetti (jposetti@icfj.org), and Rebecca Vincent (rvincent@rsf.org).