How Media Leaders in Latin America Are Building Stronger Businesses 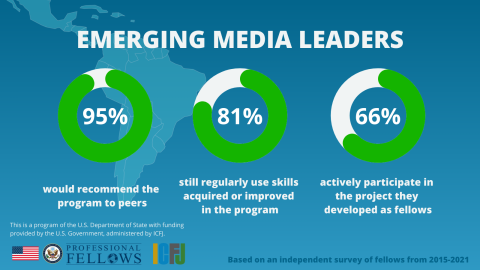 When Elaine Miranda launched Nicaragua’s first personal finance blog in 2018, she hoped it would help her build up her finance coaching business. But an ICFJ fellowship program helped her realize that her website could become her business.

The program, Emerging Media Leaders, taught her the latest skills in content creation, monetization and business development, connected her with leaders in the field and provided her with a fellowship placement at Mother Jones, where her colleagues showed her how to make better use of social media, Miranda said.

“They were very open about how and why they did it, what works, what didn’t for them,” she said.“It let me skip over a lot of mistakes I would have made if I had been doing this alone.

She also learned about repurposing content from blog posts into video and graphics, timing her publications, and monetizing content, which she has been doing ever since.

Participation in the program was “one of the best experiences in my life. It is truly a ‘before-and-after’ in everything I do,” she said.

Miranda is one of more than 200 journalists, technologists and media entrepreneurs across Latin America who have learned how to build sustainable businesses through the program, and many are still thriving.

Emerging Media Leaders is a Professional Fellows Program of the U.S. Department of State and is administered by ICFJ. It equips media professionals to turn their ideas and digital projects into viable businesses producing news in the public interest. Fellows from 21 countries work directly with U.S. media organizations. They improve their skills in business and product development, as well as areas such as investigative journalism, fact-checking and podcasting.

In an independent survey of fellows from 2015 to 2021, more than 80 percent of respondents said they still regularly use skills that they acquired or improved in the program. Nearly two-thirds said they still actively participate in the project they developed as fellows, and virtually all said they would recommend the program to their peers.

Among the many projects that continue to flourish:

“This program allowed me to imbue our organization, my project and my overall leadership efforts with high-achieving skills and a more comprehensive product culture,” said Guatemala’s Ana Carolina Alpírez, editor of watchdog journalism site Ojoconmipisto. . “I was able to connect with incredible colleagues across the region, too, and challenge myself to pursue a more specialized career in news product.”

Brazil’s Tiago Rogero, a 2019 fellow, said the connections he made during the program helped him get his project off the ground. In addition to making contacts at the  public radio station in California where he was placed for the fellowship, ICFJ connected him with Lauren Silverman of Gimlet Media. “She gave us tips, made comments, and shared a little of her experience as a producer in the United States,” Rogero said.

After the call, Silverman made a crucial introduction to a contact at Spotify, which picked up his original podcast, Vidas Negras.

The survey also found that fellows continue to collaborate with other fellows after their program ends. They also teach others the skills they learned, both informally and in new positions.

Colombia’s Elder Manuel Tobar started his 2019 fellowship intending to develop his project on “the historic memory of armed conflict in Colombia.” Participating in the program and spending a month embedded with USA Today’s virtual reality and augmented reality team broadened his thinking and transformed his career path.

Now, as a team leader in digital production at the National Library of Colombia, he brings what he learned during the fellowship to others in his country. “I am leading laboratories in academic, professional, and citizenship spaces, where we use technology, ideation, and production instruments connected to what was done in the fellowship,” Tobar said. “I think that, in the end, [the fellowship experience] also contributed to the media practice in my country."