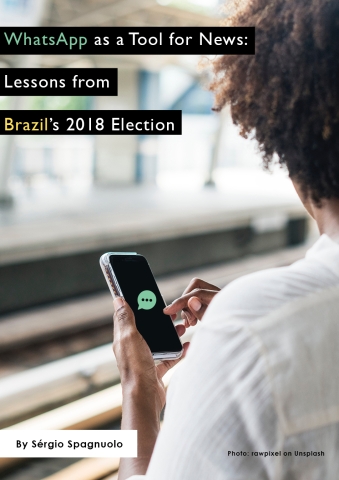 Sérgio Spagnuolo is an ICFJ TruthBuzz Fellow in Brazil. Read his latest report: WhatsApp as a Tool for News: Lessons from Brazil's 2018 Elections.

Things have changed since Facebook acquired WhatsApp for US$19 billion in 2014. The social network made the app free for everyone, and what was an already popular messaging tool became even more popular — active monthly users surged from 200 million in April 2013 to 1.5 billion in December 2017.

In Brazil, one of WhatsApp’s biggest markets, the trend was similar, as the app has become the country's predominant messaging platform. Over time, WhatsApp evolved into more than just a messaging system — it became, in its own way, a social ecosystem, in which users formed groups, engaged in heated debates and exchanged links on a daily basis.

Along with these positive developments, however, arrived a tsunami of mis- and disinformation.

People value secure communication. WhatsApp’s security and encryption, though, have come at the expense of media accessibility, and misinformation has consequently been able to roam freely through WhatsApp’s encrypted channels.

Journalists and news outlets have remained largely shut out from the platform’s influence in this respect. As a result, as WhatsApp has emerged as a primary source of news for many people — one in four internet users in Brazil said they used WhatsApp as their main news source during the country's 2018 general election, for example — it has also become a black box of unverified content. Unlike responsible journalism and fact checking efforts, false and out-of-context information don’t need to see the light of day to flourish in WhatsApp.

Facebook, meanwhile, has made significant progress in fighting misinformation on its own platform. The social media giant has created programs to increase fact-checking partnerships on the platform, removed suspected accounts and cut back on the spread of false information, including the financial incentives to produce it.

Of course, as a social network, Facebook has a more open setting than encrypted messaging apps do. Still, encryption should not serve as an excuse for the parent company to neglect tools for journalism in the messaging platform —with user consent, it would be possible for WhatsApp to implement resources so that people have better access to verified content.

One of the main reasons WhatsApp says it will not implement broadcasting tools is that it wants to prevent users from being bombarded with spam. This is a fair point. However, my study of more than 300 WhatsApp groups, and the exchange of some 200,000 messages during the 2018 Brazilian general election, shows that roughly half of the links shared are spam, anyway.

What’s more, if the user allows media outlets to send them messages with news bulletins, how is that spam? If you sign up to receive a newsletter that you can opt out of at anytime, it isn't spam — it is, well, a newsletter.

WhatsApp should take into account that, whether it likes it or not, it isn’t merely a messaging app anymore. In countries all over the world, like India and Indonesia, it is a leading source of digital communication and information, too.

To be fair, WhatsApp does have an app for businesses, and it recommends that news organizations use that — but, the app works better as a way to receive news from customers and readers than it does to broadcast content. Even the WhatsApp Business API, a paid service with a few more resources and integrations, does not facilitate the spread of messages on the platform. (To learn more, check out my recent report.)

Encryption and anti-spam measures are fundamental resources for a good messaging tool. However, false and out-of-context information are, in turn, able to move around within the app with little, if any, effective resistance. Making publisher tools compliant with good security practices is a necessary step to avoid the continued spread of mis- and disinformation within its closed system.

This story first appeared on IJNet.