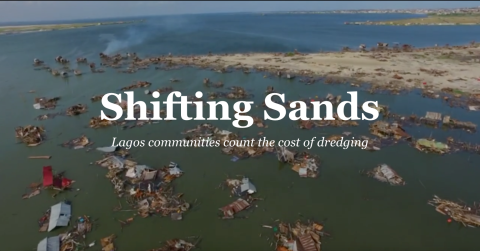 When journalists Bukola Adebayo and Tina Armstrong started reporting on coastal communities living in Lagos, Nigeria, they wanted to focus on the socioeconomic issues affecting the population’s quality of life, with the hope of bringing attention to the plight of these sometimes marginalized communities.

They soon discovered that sand mining and dredging activities were a huge problem, threatening the livelihoods of coastal residents and fueling forceful evictions and violent clashes. As they pursued the story, they partnered with Code for Africa to create compelling data-driven elements that would enhance the impact of their storytelling online.

The result was Shifting Sands, a multimedia project published in Punch, one of Nigeria’s most widely read newspapers. The piece incorporated satellite imagery, drone footage, data visualizations, text and photographs for a ground-breaking story on the environmental and socioeconomic impact of sand dredging along Lagos coastlines. ICFJ Knight Fellow Jacopo Ottaviani, a digital journalism expert who serves as Code for Africa’s data editor, guided the process of bringing all the elements together for a powerful report. 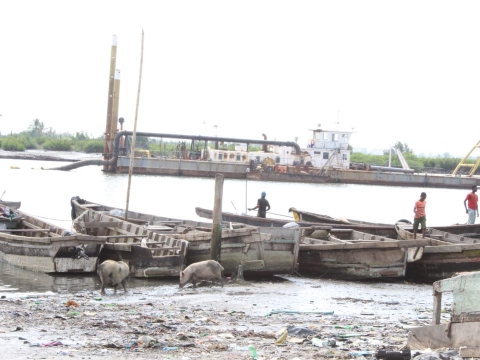 After the story was published, dredging operations stopped in the coastal settlements of Sabon Kodji and Bishop Kodji areas in Lagos, according to Adebayo, the lead journalist on the story. The project also garnered the highest number of hits recorded for a special feature on Punch’s website, with over 25,000 views in its first four weeks.

“This was my first time working on a reporting project that incorporated so many digital elements. It's also the first immersive multimedia piece to be published in Nigerian media, and it has set a new bar for digital and longform reporting,” Adebayo said.

The project was funded through grants from the Pulitzer Center on Crisis Reporting and the Open Society Institute of West Africa (OSIWA) and largely overseen by Ottaviani, who provided his expertise in data journalism, digital cartography and cross-border media management to bring the elements together. Code for Africa, the civic tech organization that partnered on the project, was founded by ICFJ Knight Fellow Justin Arenstein.

Adebayo and her team from Punch visited 10 coastal communities over a three-month period, conducting research and interviewing sand miners, community leaders and other stakeholders. While in the field, they discovered that some of the hard-to-reach areas had not been mapped. They worked with the Code for Africa digital team to gather coordinates that would help in mapping and visualizing the story in order to give the audience a better experience.

“Combining the journalism skills of Bukola and her team at Punch with the innovative vision of Code for Africa created the perfect ground for a story that became one of the most engaging pieces ever published by Punch,” Ottaviani said.

Ottaviani served as a link between the Punch team and Code for Africa’s network of data fellows, designers and developers who provided technology support on the project. For example, Code for Africa data fellow Tricia Govindasamy worked on visualizing data for the story using Atlas charts while Nairobi-based studio Lucid Vis produced a social media video to reach Punch readers via Facebook, Instagram and Twitter. The team coordinated via Slack to share all the information and digital assets that were finally put together into a longform story using the visual storytelling platform Shorthand.

Bukola credited the high audience numbers to Shifting Sands’ multimedia format, which, when combined with a powerful story, helped readers visualize the problems sand mining and dredging pose to livelihoods and the environment.

Second, newsrooms should invest time and resources to strengthen data and tech literacy. Data-savvy and tech-savvy journalists and editors will eventually be able to interface with this type of special projects.

A version of this article first appeared on IJNET, a project of ICFJ delivering the latest on global media innovation, news apps and tools, training opportunities and expert advice for professional and citizen journalists worldwide.