Maria Ressa of Rappler: The Philippines Has Reached "a Precipice” 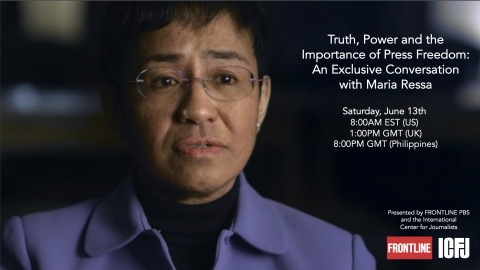 Facing a barrage of legal attacks, renowned journalist and digital news pioneer Maria Ressa says the Philippines is on the verge of experiencing the death of democracy by “a thousand cuts.” In an online event co-hosted by ICFJ and FRONTLINE, she said her country, once known for its vibrant news media, is now teetering on the brink of a “precipice.”

Ressa, the executive editor and founder of Rappler, the award winning Manila-based news outlet, spoke to more than 1,000 registered webinar participants, and tens of thousands of others who watched the panel discussion live on Facebook -- less than two days before she was found guilty Monday of a criminal cyber-libel charge by a Manila court.

Ressa warned of a new anti-terror bill awaiting President Rodrigo Duterte’s signature that essentially codifies “what we used to call abuses of power.” It permits arrests without warrants and expands the definition of a terrorist, she said. “Are we going to fundamentally change our system of governance or will we be able to retain the rights of the constitution as it stands?” she asked. “That’s now truly at risk.”

Ressa is the protagonist in a new documentary, “A Thousand Cuts,” which chronicles the erosion of democracy in the Philippines fueled in part by social media disinformation. The film’s director, Ramona Diaz, and FRONTLINE Executive Producer Raney Aronson joined Julie Posetti, ICFJ’s Global Director of Research, for the interactive panel discussion.

“What ‘A Thousand Cuts’ documented was our thousand cuts, and now we’re just at the final end,” Ressa said. “I think the Philippines is at a precipice.”

Ressa, the 2018 ICFJ Knight International Journalism Award winner, and a former Rappler staffer Rey Santos, Jr., now face a minimum of six months and a maximum of six years of imprisonment. They were released on bail, pending appeal. That case is just one of eight that Ressa confronts in a climate of state-based harassment. If convicted in all of these cases, she faces up to 100 years in prison.

The International Center for Journalists (ICFJ) and other international organizations condemned Monday’s judgement and called for all other charges against Ressa and Rappler to be dropped.

“This is a miscarriage of justice," said ICFJ President Joyce Barnathan.

Aronson called Ressa a hero for many journalists and said her story resonates beyond the Philippines. Ressa herself has often said that her case is the “canary in the coal mine” for independent journalism everywhere. “This is a warning to other journalists across the world that we need to pay attention to this,” she said, “and we need to keep doing our journalism,” she said.

Ressa said she has worked to embrace her own fear, in the face of Monday’s conviction and the prospect of spending years behind bars. “It’s OK to be scared, and then build community,” Ressa said. “It’s what we do after that that really matters.”

"A Thousand Cuts” was made available to audiences in the Philippines without a paywall in the 24 hours before the FRONTLINE-ICFJ event. More than 233,000 people watched the documentary. Diaz said responses to the film show that "there's a deep sense of sadness and regret that they’re losing something right under their sight.”

Watch the full panel discussion below to hear more on journalism’s reinvention in the context of viral disinformation, attacks on media freedom, and the slow death of liberal democracy.