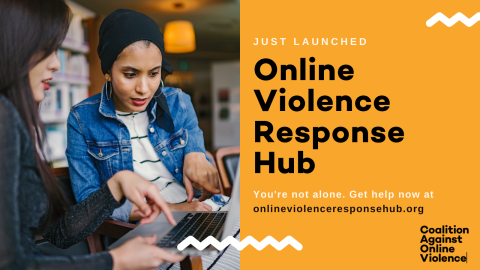 The Online Violence Response Hub is designed as a one-stop shop for women journalists under attack online, making it easier to find advice and support. It helps journalists navigate their response to online violence, from accessing trauma support to pursuing accountability for perpetrators and enablers of attacks. The site includes a suite of the latest resources on censorship, doxxing, harassment, threats, trolling and more, as well as access to services.

Maria Ressa, CEO of Rappler news site in the Philippines and a victim of many online attacks, said the hub is “an important intervention.” As she put it: “The platforms enable and encourage the online violence that makes it so much harder for women journalists to do our jobs; in cases like mine, orchestrated online attacks are precursors to the weaponization of the law and persecution by the State. We have to fight back, we have to hold the enablers and perpetrators to account, and we are stronger together.”

It comes at a critical time: According to a global UNESCO-ICFJ survey, nearly three out of four women journalists reported experiencing online violence in the course of their work. The study was  conducted in five languages and across 125 countries. Twenty percent had experienced offline attacks that they connected with online abuse, while 41 percent said they had experienced online violence as part of coordinated disinformation campaigns.

“As ICFJ's research shows, online violence takes many forms and is especially harmful to women of color, women of minority religions and women in the LGBTQ community,” said ICFJ’s President Joyce Barnathan. “It does not respect global boundaries and it demands collaborative responses like those offered on the Hub.”

The ICFJ research for UNESCO found that women journalists face a triple threat online: They are attacked for their critical, independent journalism; for being journalists; and on the basis of their sex. They are also retreating from visibility in response to large-scale attacks and prolonged exposure to online violence.

“Women journalists must be supported if they are to continue to expose injustice and amplify issues that are so often ignored,” said the IWMF’s Executive Director Elisa Lees Muñoz. “No journalist should face threats against their life and livelihood for uncovering uncomfortable truths. If we don’t address the epidemic of online violence, we eliminate the future of diversity in storytelling.”

About the International Center for Journalists

About the International Women’s Media Foundation

Founded in 1989, the International Women’s Media Foundation (IWMF) is the only global non-profit organization that offers emergency support, safety training, grants, skills building and reporting opportunities specifically for female journalists. We are making more women-produced reporting possible and work tirelessly to ensure a greater diversity of voices represented in the news industry worldwide. Follow the IWMF on Twitter at @IWMF, on Facebook at @IWMFPage and Instagram on @TheIWMF.