NYT Chairman Urges Journalists to Stand Up for Media Freedom 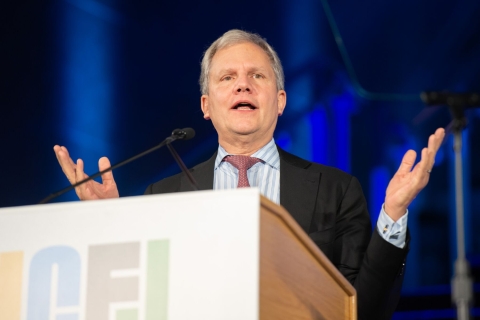 The chairman of The New York Times Company says journalists and their supporters must stand up for media freedom in the face of widespread attacks around the world.

Arthur O. Sulzberger Jr. made the comment while accepting the ICFJ Founders Award for Excellence in Journalism, which recognizes a lifetime commitment to the highest professional standards.

“Around the world, powerful forces are sowing seeds of distrust in the news media,” said Sulzberger, who pointed out that autocrats are taking note of President Trump’s attacks against American journalists.

“When autocratic rulers around the world see the President of the United States demean and attack reporters, they take note. They sense that the kinds of harsh anti-press measures that in the past would have prompted a strong American response may no longer provoke retaliation or even condemnation,” said Sulzberger, who served as publisher of The Times for a quarter-century before stepping down from that post last January.

He said journalists have the duty to stand up for media freedom. “It’s not our job to be the voice of the resistance. But it is our job is to report the facts, to stand tall in defense of “truth and trust”… and in defense of our profession’s responsibility to hold power to account.”

Sulzberger, who built The Times into a global and domestic powerhouse during his time as publisher, said the newspaper’s readership is growing faster than ever at home and faster still abroad. “We literally now have subscriptions in every country in the world...I am trying to think - we may not have many in Antarctica. But we actually have some in North Korea."

He said he found it “scary” that “today 72 percent of Republicans say they’d rather get their news directly from President Trump’s Twitter account — that is, from what is essentially state media — than from the independent press.”