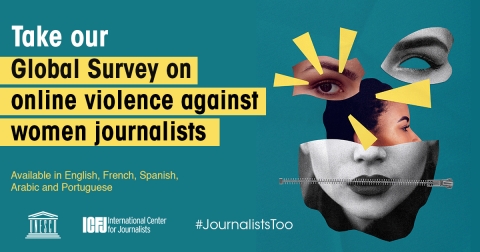 This survey is now closed.

There is a new front line in journalism safety – it is where female journalists sit at the epicentre of risk. The digital, psychological and physical safety threats confronting women in journalism are overlapping, converging and inseparable. Where and when they intersect, they can be terrifying - they are also potentially deadly.

The risks requiring identification and examination range from brutal, prolific online harassment and abuse to overt, targeted attacks that frequently involve threats of sexual violence. Increasingly, they also include digital privacy and security breaches that can expose identifying information and exacerbate offline safety threats facing women journalists. Disinformation tactics, like malicious misrepresentation using Artificial Intelligence technologies, are also a feature of the phenomenon. These combined threats can be termed ‘gendered online violence.’ The perpetrators range from individual misogynists and networked mobs seeking to shut women up, through to State-linked disinformation agents aiming to undercut press freedom and chill critical journalism through orchestrated attacks.

That is why the International Center for Journalists (ICFJ) is partnering with the United Nations Educational Scientific and Cultural Organization (UNESCO) on a global survey into the incidence and impacts of online violence against women journalists, and effective measures to combat the problem. The survey, launched today, will help us understand the manifestation of online violence in 2020 – in the context of COVID-19 and the #BlackLivesMatter movement.

To combat online violence, the scale, types, impacts and intersectional characteristics of the pernicious problem first need to be mapped globally – paying appropriate attention to under-studied developing countries. But being able to describe and understand the problem is just the first step. To respond to it effectively, we need to know what countermeasures are being tested and implemented, how they are (not) working, and what women journalists most need on the front line of this chilling crisis.

This scourge threatens women journalists around the world, across a range of platforms and digital communities. From news website comments to social media channels like Facebook, Twitter and YouTube, women in journalism are confronted daily by online violence which follows them from work to home, invading their professional and private spaces. The abuse can be prolific and feel unrelenting. It can inflict psychological injury, cause professional harm, force women out of journalism, and lead to physical violence. It has also been linked to the murder of women journalists.

Regardless of whether or not the women enduring these attacks are reporting from conflict zones, many use terms commonly associated with physical warfare to describe their experiences of online violence, giving us insight into the visceral nature of the harm inflicted. Phrases deployed by the women journalists I’ve interviewed on this theme over the past nine years include: “It's like a low-intense, constant warfare;” “A barrage of hate;” “It’s like a bombardment;” “It feels like trench warfare.” As prolifically trolled Finnish journalist Jessikka Aro has said: “Women are targeted in cyberwars the same way they are in kinetic wars.”

Gendered harassment and abuse are key aspects of online violence against journalists. When it first emerged in the early 21st century, it was too often dismissed by media employers and social media companies as something that required acceptance as an “unintended consequence” of online engagement with audiences. Frequently, the responsibility to manage the problem was placed on the targeted women themselves, who were told to “toughen up” and grow a “thicker skin” because it was “only online” and therefore not “real” or “serious.” However, extensive reportage, research and civil society advocacy since 2014 has resulted in the problem and its impacts being widely recognized internationally, including at the UN level, and there are several collaborative initiatives in development designed to support those targeted. But at the same time, online violence has become increasingly complex, widespread and entrenched, posing significant challenges to efforts aimed at effectively countering the problem.

One of the most chilling examples of online violence against a female journalist remains the 2013 case of Caroline Criado Perez in the UK. This is the kind of abuse that she suffered for daring to suggest that literary icon Jane Austen’s head should be on a bank note:

There were threats to mutilate my genitals, threats to slit my throat, to bomb my house, to pistol‑whip me and burn me alive. I was told I would have poles shoved up my vagina, dicks shoved down my throat. I was told I would be begging to die, as a man would ejaculate in my eyeballs. And then they started posting an address linked to me around the Internet. I felt hunted. I felt terrified.

There are three converging online threats currently confronting women journalists. They can be identified as follows:

This includes patterns of targeted, sexualised abuse and harassment, ranging from threats of violence (such as sexual assault, rape and murder) against the women journalists (and their daughters, sisters, mothers, etc.), through to gendered swearing and insults targeting their appearance, sexuality and professionalism which are designed to diminish their confidence and tarnish their reputations. Such abuse can come from individuals, form part of an organic ‘pile on,’ or be a feature of a networked attack driven by misogynistic groups, for example.

Privacy erosion – a combination of the criminalization of investigative journalism via national security overreach and digital security threats like mass surveillance, device seizure and interception - also heightens the safety threats faced by women journalists in the Digital Age. Methods of attack designed to compromise women journalists’ online privacy, security and safety include malware, hacking, doxxing and spoofing. They escalate the physical threats faced by women journalists because these acts can involve revealing their residential and work addresses, along with their patterns of movement.

Online violence targeting women journalists manifests itself in a variety of ways, but it has a number of common characteristics. These include:

The Link between Online Violence and Offline Attacks

In October 2017, the investigative journalist Daphne Caruana Galizia was killed when a bomb placed under her car detonated close to her home in Malta. She was investigating corruption with ties to the state. Since her death, international NGOs, European parliamentarians and media support organizations have called on the Maltese government to identify and prosecute her killers, amid accusations of impunity. Before she was murdered, Caruana Galizia endured frequent online threats and spoke about being called a ‘witch.’ There were clear gendered aspects to the intimidation she suffered and the impunity that surrounded those threats and preceded her killing.

The pattern of online violence associated with Caruana Galizia’s death is so similar to that being experienced by another high profile target - Philippines-based editor and CEO Maria Ressa - that the murdered journalist’s sons issued a public statement expressing their concerns that Ressa was also at risk of murder when State-sponsored harassment against her rose dramatically in 2020. “This targeted harassment, chillingly similar to that perpetrated against Ressa, created the conditions for Daphne’s murder,” they wrote.

Likewise, the death of the Indian investigative journalist Gauri Lankesh also drew international attention to the risks faced by women journalists openly critical of their own governments, amid calls for their killers to be brought to justice. Lankesh, who was shot dead outside her home, was known for being a critic of right-wing extremism and she was subjected to significant online abuse before her death. In the days after Lankesh’s killing, trolls took to social media to celebrate, describing her as a ‘bitch.’ Again, pointing to the emergence of a pattern, the case of another Indian journalist – Rana Ayyub – led five United Nations special rapporteurs to intervene in her defense following the mass circulation of false information online designed to counter her critical reporting. The independent journalist was on the receiving end of disinformation published on social media, including ‘deepfake’ videos, as well as direct rape and death threats. The UN experts issuing the statement in defence of Ayyub pointed to the murder of Lankesh, and called on India to act to protect Ayyub, stating: “We are highly concerned that the life of Rana Ayyub is at serious risk following these graphic and disturbing threats.”

Recognizing the likelihood of online violence crossing over into the offline world, and underlining the serious mental health impacts of online abuse, the United Nations General Assembly has adopted a resolution on the safety of journalists with a particular gender focus, "condemning unequivocally" all "specific attacks on women journalists in the exercise of their work, including sexual and gender-based discrimination and violence, intimidation and harassment, online and offline.”

Online violence against female journalists is a core tactic designed to belittle, humiliate, discredit, induce fear, cause retreat, undermine accountability journalism and chill the active participation of women journalists, their sources and audiences in public debate. This amounts to an attack on media freedom, encompassing the public’s right to access information, and it cannot afford to be normalized as a tolerable aspect of online discourse, nor ‘audience -engaged’ journalism.

About the ICFJ-UNESCO Action Research Project and How to Participate

The survey we’re launching today was produced in collaboration with the Centre for Freedom of the Media (CFOM) at the University of Sheffield. It is part of an ongoing UNESCO-ICFJ study into online violence against women journalists, involving a multidisciplinary international consortium of academic and civil society researchers (ranging from those involved in journalism studies, to political scientists and computer scientists).

Together, we are mapping the problem as it manifests in 15 countries: Brazil, Kenya, Lebanon, Mexico, Nigeria, Pakistan, the Philippines, Poland, Serbia, South Africa, Sri Lanka, Sweden, Tunisia, the United Kingdom and the United States. In parallel we are producing three novel case studies on prolifically targeted women journalists, combining Natural Language Processing (NLP) – a research method that combines linguistics, computer science, and Artificial Intelligence – to analyze perpetrator networks and the characteristics of the abusive content, alongside deep-dive interviews with the women at the receiving end of online violence.

We are supported in our work by project partners the Ethical Journalism Network (EJN), the Dart Center Asia Pacific, and the International Association of Women in Radio and Television (IAWRT).

This survey is now closed. Please send any questions to:

If you've found this content distressing or difficult to discuss, you're not alone. There are resources available to help. Start by exploring the resources from the Dart Center for Journalism and Trauma, and please seek psychological support if needed.

*This article draws on a keynote address the author gave to the Oslo Safety of Journalists conference - in November 2019 - titled The New Frontline: Female Journalists at the Intersection of Converging Digital Age Threats. It also includes content from a book chapter of the same title, written for a forthcoming anthology on peace and conflict reporting to be published by Routledge, and edited by Prof. Kristen Skare Orgeret.

Disclaimer: The ideas and opinions expressed in this article are those of the author; they are not necessarily those of UNESCO and do not commit the Organization