A Tribute to Sputnik Kilambi 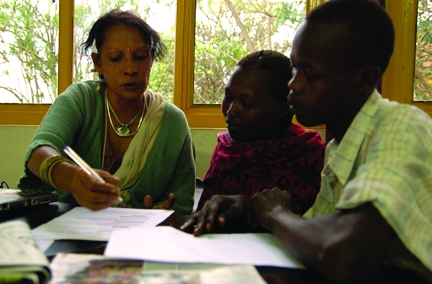 Sputnik Kilambi, a tireless and passionate journalist and former Knight International Journalism Fellow, died on July 6 after a battle with liver cancer. She was 55.

A veteran broadcaster, Sputnik had worked in Africa, Asia and Europe covering wars and humanitarian crises. She also trained teams of reporters dedicated to journalistic excellence and promoting peace in countries wracked by violence and poverty.

Like her namesake – the first satellite launched by the Soviet Union – Sputnik made a mark on the world and in her own way changed the lives of many people, inspiring and challenging them to be the best they could.

“Sputnik was a valued member of the ICFJ family, a true journalist with the highest standards and a commitment to making journalism work to improve people’s lives,” said Patrick Butler, vice president of programs for ICFJ, which runs the Knight fellowships.

Working as a Knight Fellow in Ghana in 2011, she trained and mentored journalists at Joy FM, one of Ghana’s leading English-language radio stations, to create in-depth features on social issues, economic development and poverty. The award-winning “Hotline” show they produced set a new standard for radio in Ghana.

“Sputnik gave me a new and fresher understanding of journalism when she came down to Ghana as a Knight Fellow,” said Fiifi Koomson, a JoyFM producer. “She was dedicated to and passionate about her job, inspiring a new momentum into our Hotline documentary program.”

Earlier, she worked as a Knight Fellow in Rwanda, where she trained radio journalists and helped create a tri-lingual news and features program at Contact FM, a leading private radio station in Rwanda.

“Sputnik made a huge impact on Contact FM,” said Elisa Tinsley, director of the Knight International Journalism Fellowships. “There were so many firsts for them including the introduction of morning editorial meetings to plan the day, a regular, on-time broadcast of the news, the first reporting trip to the DRC to cover rape as a crime of war – a story close to Sputnik’s heart.”

Tinsley remembered Sputnik as “a tiny woman – barely 5-feet tall and not more than 100 pounds. Yet whenever she walked into a room, whether it was a newsroom, a restaurant or a meeting, she commanded attention. She didn’t accept anything less than the best from anyone, most of all herself.”

This was true to the end. As her final assignment for ICFJ, Sputnik served as co-trainer for a six-week online course on covering development in Africa, prodding the 70 participants to examine development problems in their countries critically and to find fresh and insightful ways to tell their stories. She completed the course one week before she traveled from her home in Goa, India, to Paris, where she was hospitalized with a blood clot and later died.

Sputnik was born October 4, 1957 – the day the Soviet satellite was launched – in Hyderabad, India. She married young and moved to Paris, where she had her beloved daughter Arusha. She developed a passion for journalism, working for Radio France International (RFI) in France and other countries.

She worked for more than 10 years at RFI as a producer and presenter of news and features programs as well as documentaries on the humanitarian fallout from the conflicts in Afghanistan, Sri Lanka and Colombia in collaboration with the International Committee of the Red Cross.

She then joined Hirondelle, a Swiss media non-governmental organization, where she helped set up the first multi-ethnic radio in post-war Kosovo. She also freelanced for various European and American radio stations, reporting on socio-economic and political issues.

Later, she served as chief of UN Radio in Sierra Leone, where she worked as radio manager and trainer, supervised a staff of 25 and helped in the transition to the country’s first independent public broadcaster, a merger of UN Radio and the former national broadcaster.

Eugene Anagwe, who was mentored by Sputnik, remembers her as a knowledgeable and encouraging role model. Read Anagwe's tribute to Kilambi here.