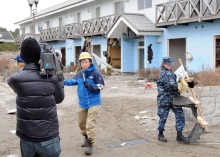 Through the program journalists highlighted the unmet need for high-quality news about Japan and for international news in general, and drew greater and deserved public attention to the Japan-U.S. relationship at a time when it was changing. Journalists probed beyond the stereotypes that sometimes characterize U.S. journalistic coverage of Japan and provided much needed news of Japan free from those stereotypes and the loaded language that journalists sometimes use.

ICFJ chose the journalists based on the quality of their proposed story ideas. Other considerations included the journalists’ professional qualifications, level of experience and their media organization’s audience. Proficiency with social media platforms, to multiply audiences and increase impact, were also an important factor in choosing the participants.

Applicants stated their cases for the topics they selected with their story proposals. However, ICFJ placed special emphasis on topics that underlined the social, environmental, energy and economic impacts of Japan’s continuing crisis stemming from the triple disasters.

Before the selected journalists traveled to Japan to begin reporting, ICFJ program staff, participants and the Japanese facilitator and interpreter convened in a series of conference calls using Skype. These opportunities were used to acquaint the journalists with one another and the Japanese interpreter-logistical specialist who assisted the journalists during their individual 12-day reporting tours. The Skype conferences also offered an opportunity to discuss each journalist’s story ideas, suggest ways to fine-tune their approaches, determine their schedules and identify key people to interview. ICFJ program staff assisted with travel arrangements, visas and other logistics. Orientation took place September 10-21. Applicants had to be available during that time.

After the selection and period of orientation, the journalists undertook their individual 12-day reporting tours over a three-month period accompanied by an experienced Japanese reporter and journalist. Participants worked with the Japanese expert to organize necessary meetings and plan travel around Japan.

PHASE 3:
Return and completion of reporting – November and December 2012, January 2013

After the American journalists returned home, they completed their stories for publication or broadcast. ICFJ used its own website to feature the stories by linking to them or uploading the various components in text, audio or video. The individual journalists were expected to publicize their stories via social media and professional connections.

Due to an error in our system we accepted applications through: Thursday, August 9, 2012