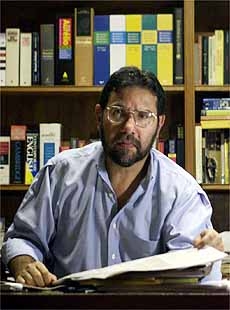 Marcelo Beraba graduated in journalism from the Federal University of Rio de Janeiro. He began his career in journalism at the newspaper O Globo in Rio in 1971. Between 1984 and 1988, he served as reporter and then head of reporting and director of the Rio bureau of Folha. In 1989 he served as managing editor of Folha, São Paulo where he was responsible for the coverage of the first direct democratic elections for president in Brazil since 1961. In 1996, he was the executive editor of Jornal do Brasil in Rio, and in 1998, the executive editor of the TV news program Jornal da Globo on TV Globo/São Paulo. From 1999 to 2004, he was director of Folha’s local bureau until he was appointed as the ombudsman of Folha de S.Paulo – a three-year term that just ended. He was a director of the Committee for Freedom of Expression and the Editorial Committee of the ANJ (Brazilian Newspaper Association). A Knight International Press Fellowship Award recipient, Mr. Beraba is president of Abraji (Brazilian Association of Investigative Journalism).