'Digital Fridays' Bring a Culture of Experimentation to The Hindustan Times 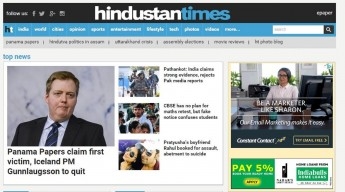 In 2015, ICFJ Knight Fellow Nasr ul Hadi was embedded at The Hindustan Times to drive the adoption of new digital tools and methods across departments, locations, hierarchies, even age groups. His experiment with weekly peer-to-peer training sessions — called Digital Fridays — helped “hack the culture” at one of India’s most venerated legacy media outlets.

Hadi talks with IJNet about how the sessions led to exciting collaborations and storytelling.

IJNet: What was the concept behind Digital Fridays?

Hadi: The most innovative teams in journalism today are the ones that are constantly discovering, testing and adopting or dropping new tools and practices for digital-led sourcing, production and distribution of content. This is how they add Dataminr, CartoDB, Slack, Parse.ly, Sprout Social, etc., to their toolkit for social listening, data visualization, workflow management, content analytics, audience development and more. The best might even build such products in-house.

Chief Content Officer Nic Dawes and I believed that inculcating this behavior across HT’s newsroom was the only way to achieve — and more importantly sustain — a digital-first mindset. I put a two-hour session on the calendar for Fridays, to provide hands-on training in new skills and related tools each week.

How were Digital Fridays different from other training opportunities at HT?

Newsroom trainings are usually a push effort. Bosses identify the skill gaps in a particular team, an outside trainer prescribes a curriculum and human resources makes it mandatory to attend. The structure is very much like a class, with a few exercises and maybe even a graded test at the end.

Digital Fridays were totally the opposite.

Attendance was through signups and never compulsory. We let individuals themselves decide whether a specific session was relevant to them. This enabled livelier discussions and more interesting collaborations because you sat next to colleagues you either rarely worked with or had never even met. For instance, we had a top investigative journalist — even a managing editor — sitting next to trainees and asking them for clarifications.

The themes — using digital radars to find news, producing interactive media and visualizations, developing datasets for stories, securing and encrypting documents and communication, working via chat instead of email — were all positioned as explorations of new skills, not fixes for gaps.

Most importantly, the quickest learners went on to assist with sessions and eventually led them on their own. After the first 10 Fridays, we had a curriculum for each session, templates for signup and feedback forms, and this small "innovations group" — a precursor to what is now the HT Labs team — who ran the next 10 sessions on autopilot, while I traveled to HT’s other bureaus and even its Hindi newsroom to introduce the same model.

How many HT staffers participated?

When we started, HT hadn’t yet moved to its new 40,000-square-foot newsroom. We ran these sessions out of a small conference room in a corner of the old office, able to accommodate only 15 to 20 participants at a time, and often in conflict with several other trainings that HT's leadership had mandated for the entire editorial staff of 740 in Delhi.

Still, 150+ unique editorial staffers — more than 20 percent of the overall strength at HQ — attended one or more of these sessions. Often, our wait list for a session was longer than the number of attendees. Another 100 staffers at HT’s Hindi publication later attended a scaled-down version of the same program.

Have the trainings had any impact?

Digital Fridays led to new kinds of collaborations, where journalists sought out tech, multimedia or product specialists who they usually didn’t work with — mostly because such roles hadn’t existed until then. The new editorial engineer helped the tech desk's lead analyze and write about the huge dataset on Indians in the Ashley Madison leak. The metro team worked with the multimedia desk’s lead to use Atavist for HT's first experiment with long reads. A journalist-cum-developer, also HT's first-ever such role, coded his own template for long formats, and helped more and more reporters tell their stories this way, to the point where In Depth is now a dedicated section on the HT website.

The most interesting of these collaborations involved the top investigative journalist I’d mentioned earlier, a regular at Digital Fridays who became very keen to learn new stuff and work with younger people. The indirect result, months later, was the investigative reporter’s first long multimedia feature called "Kashmir’s Disturbing New Reality"— possibly the first time an Indian media organization has done this kind of a deep multimedia piece on Kashmir — where she gave 20-somethings in the newsroom an opportunity to help tell her story better with videos, timelines, interaction design and more.

Do you think Digital Fridays can grow and evolve?

Digital Fridays is a template that can be adopted by newsrooms across the world. We have an open curriculum that can be customized by other newsrooms. I have already conducted a few two-day training sessions in other organizations, introducing the idea of regular weekly peer-to-peer trainings.

But if newsrooms can think of Digital Fridays as a platform and not just a program, they could start inviting pitches from out-house specialists who have ideas about applying niche skills to journalism — machine learning, social CRM, sensor-driven data collection and much more. And reserving a few seats for attendees from competing publications could also work as a pipeline for talent in this industry focused on innovation and change.