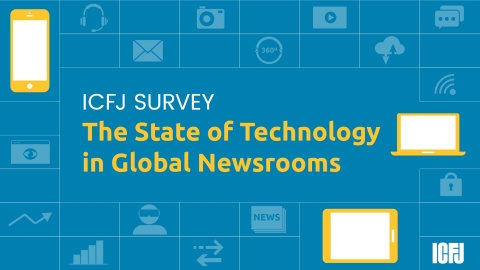 In an era of fake news, digital security threats and competition for audience attention, journalists and newsrooms lack the technology skills to meet the challenges they face, revealed the first-ever global survey on the adoption of new technologies in news media.

The results from The State of Technology in Global Newsrooms, a study conducted by the International Center for Journalists (ICFJ), showed which regions are the leaders and laggards in digital technology adoption, among other findings. While the disruptions in today’s newsrooms have been widely examined, the study focused on a missing link: how journalists worldwide are using technology. It is based on responses from more than 2,700 newsroom managers and journalists from 130 countries, who provided responses in 12 languages.

View the full report, and see highlights from the survey on Medium.

“Despite the gains in embracing technology, journalists are simply not keeping pace with the transformations sweeping the industry,” said Joyce Barnathan, ICFJ’s president. “This study pinpoints the gaps, helping us understand how to make headway now in everything from newsroom training to digital security.”

Several of the findings reveal that journalists lack digital skills essential to the mission of reaching the public with timely, accurate information without putting their sources or themselves at unnecessary risk.

The study’s other key findings were:

View the full report, and see highlights from the survey on Medium.

About ICFJ To meet the urgent need for reliable information, ICFJ promotes a professional journalism whose primary goal is to seek the truth. We help journalists use best practices and new technologies to improve the quality of news media. We believe that better journalism leads to better lives. Follow us on Twitter at @ICFJ.