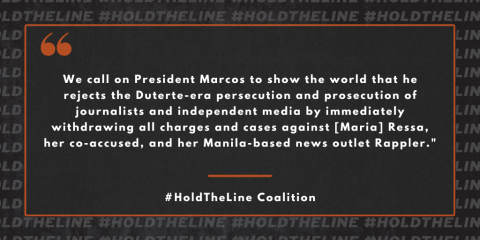 President Ferdinand Marcos Jr. should demonstrate his stated commitment to press freedom by ending the State’s attempts to jail Nobel Laureate Maria Ressa, who is threatened with imprisonment in a Philippine jail, the Hold the Line Coalition has urged.

This week, the Philippine Court of Appeals rejected Ressa’s motion for a reconsideration of her 2020 conviction on a trumped-up charge of criminal cyber libel. This means that after a two-year struggle to overturn her conviction, all that stands between Ressa’s freedom and a lengthy prison sentence is a final appeal to the Supreme Court, and the government’s political will.

“We call on President Marcos to show the world that he rejects the Duterte-era persecution and prosecution of journalists and independent media by immediately withdrawing all charges and cases against Ressa, her co-accused, and her Manila-based news outlet Rappler,” the Hold the Line Coalition steering committee said, on behalf of more than 80 international organizations joining forces to defend Ressa and support independent media in the Philippines.

“President Marcos should begin by ending his government's opposition to Ressa’s appeal against her conviction on spurious criminal cyber libel charges, which were pursued and prosecuted by the State despite the Philippine Supreme Court’s warning that the country’s criminalization of libel is ‘doubtful’.”

There have been 23 individual cases opened by the State against Maria Ressa, Rappler and its employees since 2018. The criminal cyber libel case is one of seven ongoing cases implicating Ressa. If she is successfully prosecuted in all cases, she theoretically faces up to 100 years in jail.

The criminal cyber libel conviction is the most urgent, with an increased sentence of up to six years and eight months handed down by the Philippine Court of Appeal in July 2022.

Ressa is now in the process of filing a final appeal to the Philippine Supreme Court, which could then swiftly issue a written verdict, resulting in the enforcement of her prison sentence.

Concurrently, Rappler is also the subject of a shutdown order pursued by the Duterte administration.

NOTE: The #HTL Coalition comprises more than 80 organizations around the world. This statement is issued by the #HoldTheLine Steering Committee, but it does not necessarily reflect the position of all or any individual Coalition members or organizations.