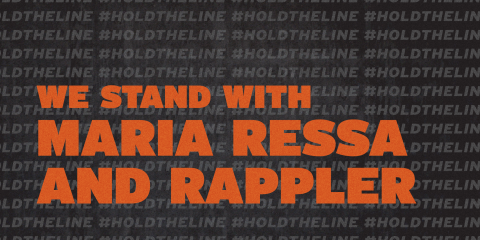 The #HoldTheLine Coalition demands the Philippines authorities drop a barrage of bogus tax and foreign ownership cases against internationally celebrated journalist Maria Ressa and Rappler - the news organisation she founded.

“The prosecution of baseless financial charges and cases represents an attempt to use tax law and foreign ownership regulations as another weapon to criminalise journalism and silence Ressa and Rappler as threats to press freedom and democracy escalate in the Philippines,” said the #HoldTheLine steering committee. “We urge the government to drop all charges and cease and desist its orchestrated harassment campaign.”

The Coalition - a global collective of 78 civil society and journalism organisations - was formed to defend the prominent Filipino-American editor after she was convicted on a trumped-up criminal cyber libel charge in June.

The Coalition’s call for the dismissal of all tax and foreign ownership cases and charges comes as Ressa prepares to return to court in Manila on July 22nd on a baseless criminal tax charge, amid concerns about a  suspected COVID-19 outbreak involving the death of a worker at the Pasig Regional Trial Court where the hearing will take place.

Ahead of this appearance, this Court has an opportunity to quash the criminal taxation charge on which Ressa faces arraignment. The #HoldTheLine Coalition urges the state to immediately drop this charge and end the prosecution of the other charges and cases associated with it.

Convictions against Ressa in three related tax cases cumulatively represent prison sentences of 44 years. They hinge upon the bogus notion that Rappler’s parent company, Rappler Holdings Corporation (RHC), is not a holding company for a news organisation but rather a ‘dealer in securities.’

"Legal acrobatics - that's what all these cases show. In order to charge me with tax evasion, the government reclassified Rappler as a ‘dealer in securities’ - we're obviously a news organisation. It's absurd!" Ressa said. "From inciting hate on social media to weaponising the law to using the full force of the state against journalists trying to hold power to account ... it's a war of attrition, tearing down trust and credibility. This is how democracy dies by a thousand cuts.”

It is notable that the arrest warrant in the criminal case associated with the July 22nd arraignment was issued in the immediate aftermath of Ressa being honoured with two prestigious international journalism awards in November 2018 --- from the International Center for Journalists (ICFJ) and the Committee to Protect Journalists (CPJ), which together with Reporters Without Borders (RSF) form the #HoldTheLine Coalition Steering Committee.

The tax-related cases and charges are predicated on another suite of charges and cases connected to alleged foreign media ownership breaches designed to shut Rappler down. They cumulatively represent maximum prison sentences of up to 36 years.

Together with the criminal libel conviction, which is currently under appeal, and a second pending libel action, convictions in all these cases could theoretically lead to a century in jail for  Ressa.

Further, the Coalition calls on the Pasig Regional Trial Court to conduct proceedings remotely on July 22nd to ensure the safety of Ressa, her legal representatives, media and court staff amid the coronavirus pandemic. We note that in addition to this court being associated with what appears to be a deadly COVID-19 outbreak, Ressa was forced into lockdown following her appearance in June before a different court which was also the subject of a COVID-19 scare.

This demand from the #HoldTheLine Coalition echoes the call by more than 10 thousand signatories who have signed a petition calling on  the Philippine government to drop all cases against Ressa, her former colleague Reynaldo Santos Jr, and Rappler, and to cease attacks on independent media in the Philippines. Once again, we also note the devastating blow to media freedom and access to information caused by the Duterte administration’s permanent shuttering of the national TV station ABS-CBN.

Note: The #HoldTheLine Coalition currently comprises 78 organisations. This statement is issued under the authority of the #HoldTheLine Steering Committee but it does not necessarily reflect the position of all or any individual Coalition members or organizations.

ICFJ, Hampton University Team Up to Offer Students Opportunities in the Field of International Journalism

The International Center for Journalists and the Scripps Howard School of Journalism and Communications (SHSJC) at Hampton University have forged a new partnership designed to help students succeed in international journalism careers. The new partnership, which includes an internship program, aims to provide equitable opportunities for underrepresented communities in the field.

#HoldTheLine Coalition Welcomes Reprieve For Maria Ressa, Demands All Other Charges and Cases Be Dropped

The #HoldTheLine Coalition welcomes a Manila court’s decision to dismiss the second criminal cyberlibel charge brought against celebrated American-Filipino journalist Maria Ressa but demands the immediate withdrawal of all other charges and cases filed against Ressa and her news website Rappler.