While 64% of all white women journalists who took part in a global UNESCO-ICFJ survey said they had experienced online violence, the rates were higher for those identifying as Black (81%), Indigenous (86%), and Jewish (88%). The data also shows that Arab women are substantially more at risk of experiencing offline attacks connected to online violence (53% compared to 20% overall).

These are among the key findings of a discussion paper published today based on a major UNESCO study carried out by ICFJ, which won an open bid to do the research. It draws on interviews with 173 international journalists and experts, over 900 survey responses, and a big data analysis of over 2.5 million social media posts directed at prominent journalists Maria Ressa of Rappler in the Philippines and Carole Cadwalladr, an investigative journalist and columnist in the United Kingdom. 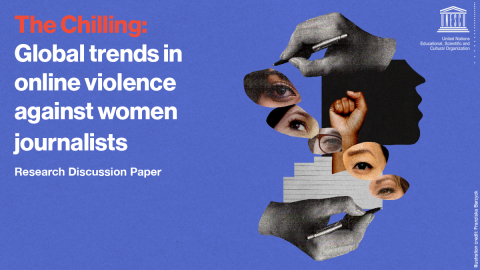 Most of the women interviewed for the research experienced disinformation-based attacks designed to smear their personal and professional reputations, from accusations that they peddle “fake news” to the spread of false narratives about their personal lives and the use of “deepfakes.”

“I'm not in a war zone, I'm behind a computer,” said investigative journalist Brandy Zadrozny, who covers disinformation for NBC News and MSNBC in the U.S. “But the effect of online harassment and bad faith journalism from disinformation agents...is meant to silence us, meant to stop our reporting, meant to scare us. I think it does all of those things... And that takes a real toll on you.”

These attacks have a chilling effect on women's journalism and their freedom of expression: Nearly one-third (30%) of survey respondents who reported experiencing online violence said they self-censored on social media in response, while one in five (20%) described how they withdrew from all interaction online.

The report, “The Chilling: Global trends in online violence against women journalists,” is the largest study of its kind to date. Led by ICFJ Global Director of Research Julie Posetti, it presents an eye-opening look at the breadth, nature and consequences of this deeply disturbing trend, one that has worsened in the context of the pandemic.

The study was released ahead of World Press Freedom Day, underscoring how online violence is a critical journalism safety issue as well as a threat to democracy and, as the report’s authors put it, “cannot afford to be normalized or tolerated.”

The key findings are alarming. Among them:

As online violence against women journalists escalates, social media companies, news organizations and governments are struggling to respond effectively, highlighting the urgent need for policy reform. The report’s authors recommend that tech platforms develop better reporting systems for women journalists and their employers, that news organizations ensure their staff have access to meaningful support for online safety, and that political parties punish members who engage in online attacks against women journalists. There are 28 recommendations in the report.

“For too long, the emphasis has been on making women journalists responsible for their own defense and protection, rather than making the perpetrators and instigators, the platform enablers, and law enforcement and employers accountable,” the researchers conclude.

In addition to Posetti, the report’s co-authors are: Nabeelah Shabbir and Nermine Aboulez (ICFJ), and Dr. Diana Maynard and Prof. Kalina Bontcheva from the University of Sheffield. Twenty-four researchers in 16 countries conducted interviews with women journalists and experts around the world. The work builds on an earlier UNESCO-ICFJ publication on the theme, which found that three out of four women journalists surveyed (73%) said they had experienced online violence.

ICFJ will be holding two virtual events to explore the research in greater detail. The first will be a joint UNESCO-ICFJ panel to launch the report on Friday, April 30, at 11 am EST/3 pm GMT during the global World Press Freedom Day conference. Click here to register for the event. It will feature Ahmed Imran of the Center for Countering Digital Hate, Ressa – who is the winner of the 2021 UNESCO/Guillermo Cano World Press Freedom Prize –  Posetti, and NBC’s Zadrozny, with ICFJ Knight Fellow Catherine Gicheru as moderator. The second will be a conversation with Ressa and Posetti on Thursday, May 6, at 10:30 am EST/2:30 pm GMT, with Google News Vice President Richard Gingras moderating. Sign up here.