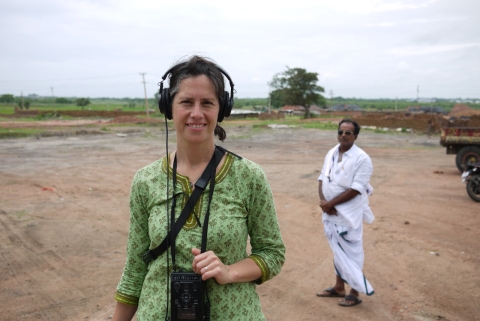 Fellow Liz Jones received honors for "Two Indias, Near and Far," a series that explores immigration to the U.S.

As fellows in the 2014 Bringing Home the World International Reporting Fellowship and the Social Justice Reporting for a Global America Fellowship, the journalists received funding and support to pursue stories overseas. They tackled topics such as immigration, religion and sexual exploitation. They traveled to places such as Mexico, India and Argentina and then produced stories for news outlets including National Public Radio, the San Antonio Express News and the GlobalPost.

The award winners are:

(Zachary Pincus-Roth’s story was named a finalist in the Association of Alternative Newsmedia Awards and a finalist for a Southern California Journalism Award.)

The fellows join a long list of former ICFJ participants who have won awards for their fellowship work.

Maria Zamudio, who received a Peabody Award for her work, traveled to Central America to document the sexual exploitation that women migrants face when traveling to the U.S.-Mexico border. She spoke with women and children in shelters in Mexico. Her reports were broadcast by NPR Latino USA as part of a special series titled “Gangs, Murder and Migration in Honduras.” They also appeared in The Commercial Appeal of Memphis, Tenn.

"This story was hard to report and incredibly painful to put together," said Zamudio. "The women I met along the migrant trail didn't trust people at first. It took a while for them to trust me enough to talk honestly with me about the reasons they left their countries of origin and the dangers they face along the migrant trail."

Rebecca Sanchez, recipient of an Edward R. Murrow Regional Award for best use of video, faced similar obstacles while reporting her GlobalPost story, which focused on reproductive rights and religion in Argentina.

"We had an incredibly difficult time," Sanchez wrote in an email about the award. "The topic itself is so contentious. There were moments along the way that were frustrating, and there was concern that we wouldn't do the issue justice."

Sanchez noted that the importance of the story, and ICFJ’s support, helped her complete the project. "ICFJ was really instrumental in this whole thing," Sanchez wrote. "The entire structure, the constant presence before, during and after, created such a sense of security. I knew I could email any number of people or Facebook with the other journalists in the group to get feedback, ask questions, or just have someone hear me out and express support."

ICFJ congratulates the winners for their stellar work.

To read more of the 2014 fellows’ stories, including the other award-winning reports, see the fellowship compendium.