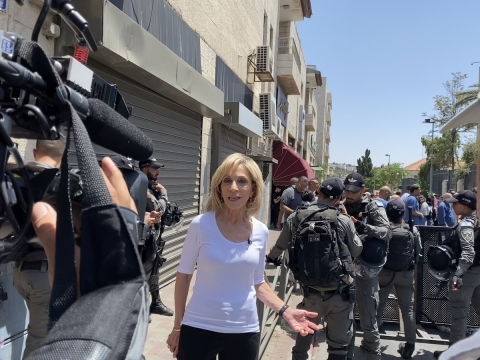 The International Center for Journalists will honor Andrea Mitchell, chief foreign affairs correspondent and chief Washington correspondent for NBC News, with the ICFJ Founders Award for Excellence in Journalism. She will receive the award at the ICFJ Tribute to Journalists 2022 event on November 10 in Washington, D.C.

Mitchell is host of MSNBC's “Andrea Mitchell Reports,” and she is the network’s leading voice on U.S. foreign policy and international diplomacy – including on the current war in Ukraine. Mitchell also reports on intelligence and national security issues across all NBC News and MSNBC properties.

Over a career spanning 55 years, Mitchell has become known for her tenacity and her expert analysis, whether breaking news during presidential campaigns or illuminating complex issues through exclusive interviews with U.S. and foreign leaders. She has covered some of the most important international stories of the past half-century from North Korea, Afghanistan, the Middle East, the Balkans, Pakistan and Haiti, among many others.

In March 2022, Mitchell reported from Brussels and Warsaw on President Biden’s meetings with NATO, G7 and European Union leaders amid Russia’s ongoing attack on Ukraine. In May 2021, she conducted the first television interview with Antony Blinken after his confirmation as U.S. secretary of state. In the same month, she reported from Israel on Secretary Blinken’s first trip to the Middle East; she has covered every secretary of state’s visit to the region since 1994, providing unparalleled analysis of one of the world’s most enduring conflicts.

“Andrea Mitchell is one of the most important journalists of our lifetimes, and we are proud to honor her with the ICFJ Founders Award,” said ICFJ President Sharon Moshavi. “From keeping us informed about the vital diplomacy happening right now to resolve the Ukraine war to breaking news about political developments for decades, Andrea Mitchell does it all. And she does it better than just about anyone.”

Mitchell also closely covered the complex U.S.-Cuban relationship for decades and led NBC News’ coverage of the historic thaw with the island country beginning in 2014, including a series of interviews with Cuban President Fidel Castro.

Mitchell is one of the leading political reporters of a generation, having covered eight presidents, from Jimmy Carter to Joe Biden. In 2019, she co-moderated the Democratic presidential debate as part of the first all-female team of presidential debate moderators. During the 2016 election cycle, she led coverage of Hillary Clinton’s second presidential campaign, becoming known as the “dean of the Clinton press corps.”

The ICFJ Tribute to Journalists 2022 will take place at the Ronald Reagan Building and International Trade Center and will be broadcast virtually as well. CNN Anchor Wolf Blitzer will serve as master of ceremonies, as he has generously done since 2012.

At the same event, ICFJ will present the Knight International Journalism Awards, which honor journalists whose pioneering coverage or media innovations have made an impact on the lives of people in their countries or regions. The winners of those awards will be announced in May. They are supported by the John S. and James L. Knight Foundation, which funds the ICFJ Knight Fellowships.

To learn more about the event or become a sponsor, go here.