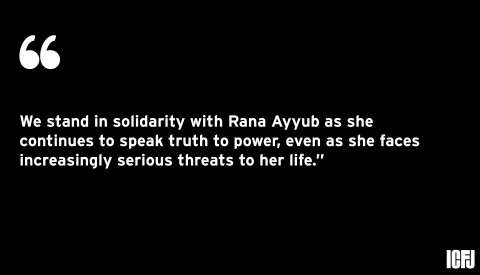 ICFJ issued the following statement on her case: “We stand in solidarity with Rana Ayyub as she continues to speak truth to power, even as she faces increasingly serious threats to her life. We call on news publishers, civil society organizations and the diplomatic community to vigorously defend her right to practice journalism freely and safely in India.”

“We also call on the Indian government to defend her rights under international law to practice journalism freely and safely, by ending its legal persecution of Ayyub  and forcefully condemning the attacks against her online and offline, which are designed to intimidate her into silence.”

Constant threats of murder, sexual violence and arrest, in the context of a rising tide of radical nationalism inflamed by India’s central government, represent serious risks to the Mumbai-based journalist.

In January, Ayyub wrote in The Washington Post about the tens of thousands of abusive social media threats she was enduring as her name trended on Twitter in connection with the attacks, which she said mostly came from users identifying as right-wing Indians or Saudi nationalists. Since then, the threats have continued, with threatening behavior reported on the street outside her home.

At the same time, the multi award-winning journalist’s bank accounts were frozen again — for the second time in six months — by Indian authorities pursuing questionable tax and foreign investment-related cases against her.

ICFJ’s research team is studying the online violence directed at Ayyub in collaboration with computer scientists and linguists from the University of Sheffield as part of a UK government-funded research project. The initiative is designed to support development of an early warning system to predict and prevent online violence against women journalists.

So far, having examined millions of tweets, the team has found evidence of clear and familiar patterns of sustained misogynistic and sectarian attacks on Ayyub. These are designed to damage her personally and professionally, as she continues to report and commentate critically on India’s Hindu nationalist government led by Prime Minister Narendra Modi.

These attacks on Ayyub are chillingly similar to those endured by Nobel Peace Prize-winning journalist Maria Ressa, who has been relentlessly pursued, persecuted and prosecuted - online and offline - in retaliation for her critical reporting of President Rodrigo Duterte’s regime in the Philippines. Ressa tweeted her solidarity with Ayyub on Feb. 11.