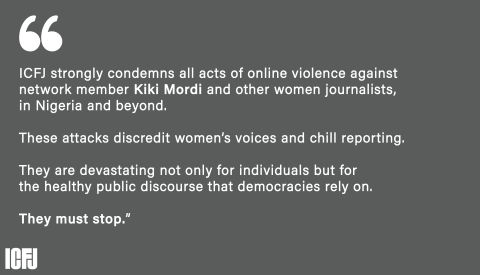 Mordi is an ICFJ Michael Elliott Award winner who was nominated for an Emmy for her reporting on the BBC’s Sex for Grades documentary which exposed lecturers in Nigeria and Ghana for sexually harassing their female students. She shared her own story of surviving sexual abuse and harassment in the documentary, and she has also participated in the ICFJ-UNESCO online violence project which has documented the global crisis of misogynistic attacks on women journalists.

Mordi’s case is an example of one of the key findings from the ICFJ-UNESCO online violence study The Chilling: “Partisan news outlets, media operating at the fringes of the political spectrum, and misogynistic journalists are instrumentalized to amplify and fuel attacks.” Such perpetrators trigger pile-ons against their targets in acts that should be called out as unethical and predatory.

Attacks on Mordi have been instigated and fuelled by a Nigerian ‘investigative journalist’ who has published false and unsubstantiated accusations about Mordi’s sexual and professional conduct on Substack and Twitter, alongside allegations leveled against a number of other credible journalists. Additionally, Mordi has been doxxed, a number of confidential sources have been exposed, and the name of her abuser has been identified without her consent.

ICFJ strongly condemns all acts of online violence against network member Mordi and other women journalists, in Nigeria and beyond. These attacks discredit women’s voices and chill reporting. They are devastating not only for individuals but for the healthy public discourse that democracies rely on. They must stop.

“We reinforce our respect for Kiki Mordi’s exceptional investigative reporting on sexual harassment and abuse of women in Nigeria and Ghana. We have recognized her journalism with a prestigious award and we will continue to showcase her reporting on gender, which we know from our research can be a lightning rod for online violence designed to silence women,” ICFJ President Sharon Moshavi said.

ICFJ calls on Substack and Twitter to investigate the accounts attacking Mordi and other credible journalists and take action to protect the targets of this vicious, sexist trolling.

ICFJ recently published a podcast focused on Mordi’s investigative reporting which illuminates her reporting on the ‘Sex for Grades’ story.

We stand with Kiki Mordi in calling for an end to these damaging and unjustified attacks.