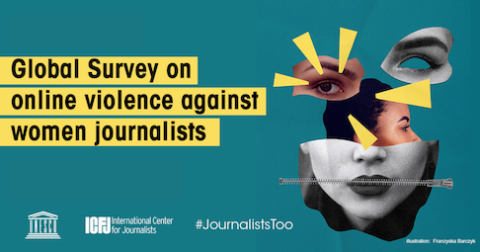 An alarmingly high number of women journalists are now targets of online attacks associated with orchestrated digital disinformation campaigns. The impacts include self-censorship, retreat from visibility, an increased risk of physical injury, and a serious mental health toll. The main perpetrators? Anonymous trolls and political actors.

These findings are among the first released in a survey conducted by the United Nations Educational, Scientific and Cultural Organisation (UNESCO) and the International Center for Journalists (ICFJ) on online violence against women journalists. They paint a global picture of the deeply entrenched nature of gendered abuse, harassment and sexualized attacks against women journalists, along with the obstacles to effective solutions.

The survey, which is the most comprehensive and geographically diverse survey ever undertaken on the theme of online violence, was offered in five languages and received responses from 714 women journalists* across 113 countries. It is part of a broader UNESCO-commissioned study to examine online violence in 15 countries, with an emphasis on intersectional experiences and the Global South.

The women journalists surveyed said they had been subjected to a wide range of online violence, including threats of sexual assault and physical violence, abusive language, harassing private messages, threats to damage their professional or personal reputations, digital security attacks, misrepresentation via manipulated images and financial threats.

These methods of attack are growing more sophisticated and evolving with technology. They are also increasingly associated with orchestrated attacks fueled by disinformation tactics designed to silence journalists. This points to the need for responses to online violence to grow equally in technological sophistication and collaborative coordination.

Here are the top 12 findings from the report, which was published by UNESCO to mark International Human Rights Day. View the full report here.

Online attacks against women journalists have been a pernicious problem for many years. Now, these appear to be increasing dramatically and uncontrollably around the world, as our respondents illustrated.

But these threats aren’t just directed at the women being targeted — they radiate. Thirteen percent of respondents said they had received threats of violence against those close to them.

This finding is particularly disturbing given the emerging correlation between online attacks and the murder of journalists with impunity. In related findings, 13% said they increased their physical security in response to online violence, and 4% said that they had missed work due to concerns about the attacks jumping offline. This highlights both their sense of vulnerability and their awareness of the potential offline consequences of digital attacks.

Online violence against women journalists causes significant psychological harm, especially when it is prolific and sustained. But our survey also demonstrated that media employers need to do much more to support the mental health and well-being of those targeted. Only 11% of our respondents said their employer provided access to a counseling service if they were attacked.

This highlights the fact that much online violence targeting women journalists occurs in the shadows of the internet, away from public view where dealing with the problem can be even more difficult.

This data underlines the function of misogyny in online violence against women journalists. It also spotlights the role of political attacks on the press, connected to populist politics in particular, exacerbating threats to journalism safety .

Women journalists increasingly find themselves in the crosshairs of digital disinformation campaigns which leverage misogyny and other forms of hate speech to chill critical reporting.

The role of political actors as top sources and primary perpetrators of online violence against women journalists is an alarming trend confirmed by this survey. Meanwhile, the proliferation of anonymous and pseudonymous “troll” accounts complicates the process of both investigating the perpetrators and efforts to hold them to account. A lack of transparency and limited responsiveness by the platforms, especially those where attacks are prolific, compounds this problem.

Considering the role of Facebook and Twitter as major vectors of online attacks against women journalists, the levels of reporting to the social media companies demonstrated by the survey respondents appear relatively low. This likely reflects both a sense of futility frequently associated with such efforts, as well as a general reluctance among the women surveyed to raise these issues externally. In addition, the finding underscores the urgent need for major internet companies to fulfill their duty of care and more effectively tackle online violence against journalists.

The respondents demonstrated the existence of a double impediment to effective action to deal with online violence experienced in the course of their employment: low levels of access to systems and support mechanisms for targeted journalists, and low levels of awareness about the existence of measures, policies and guidelines for addressing the problem.

Such acts, which could be considered defensive measures employed by women to preserve their safety, demonstrate the effectiveness of online attack tactics: They are designed to chill critical reporting, silence women and muzzle truth-telling.

While some of these numbers might appear small, this is a significant indicator of the perniciousness of the problem. This data also demonstrates the negative implications of online violence for gender diversity in (and through) the news media.

Ultimately, this survey’s first results illustrate that online violence against women journalists is a global phenomenon that demands urgent action. For freedom of expression to be sustained, for diversity in journalism to flourish, and for access to information to be equal, women journalists must be seen and heard.

The climate of impunity surrounding online attacks raises questions that demand answers. Impunity emboldens the perpetrators, demoralizes the victim, erodes the foundations of journalism, exacerbates risks to journalism safety and undermines democracy. Based on these disturbing findings, nine recommendations for action are offered in the full report, targeting governments, the social media platforms and media industry employers.

*From an original sample of 1,210 self-selecting international survey respondents, 901 were accepted as valid detailed analysis. This report is based on a gender-disaggregated analysis of the 714 women-identifying respondents.

Dr. Julie Posetti is the global director of research at the International Center for Journalists (ICFJ). She is an award-winning journalist, who is academically affiliated with the University of Sheffield’s Centre for Freedom of the Media (CFOM) and the University of Oxford’s Reuters Institute for the Study of Journalism (RISJ).

Nermine Aboulez is a research associate at ICFJ and a PhD candidate at the University of Oregon.

Kalina Bontcheva is a professor in computer science at the University of Sheffield and a member of the CFOM.

Jackie Harrison is professor of public communication, UNESCO chair on media freedom, journalism safety and the issue of impunity and chair of CFOM at the University of Sheffield.

Silvio Waisbord is director and professor in the School of Media and Public Affairs at George Washington University.