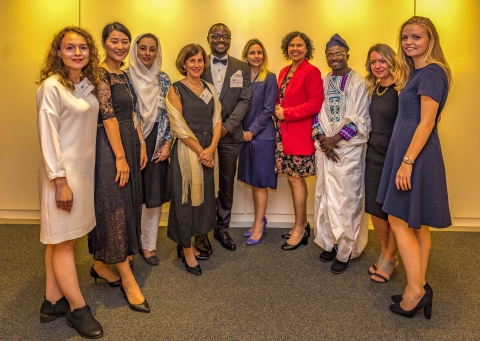 Journalists whose work brought to light inadequate and life-threatening medical care for mothers and newborns in Brazil, Ghana and India are among the winners of the 2017 Global Health Reporting Contest. Other winners reported on childhood cancer in China, a scourge of hepatitis C in Russia, and new medical centers for poor citizens in rural Benin.

A distinguished panel of judges selected the six winners from more than 130 submissions. The program is sponsored by Johnson & Johnson. The reporters visited Washington, DC, Atlanta and New York this fall as part of a 12-day study tour to meet with medical experts and health journalists. Each winner received a $1,000 cash prize.

The Global Health Reporting Contest, now in its fourth year, has increased the quality and quantity of news coverage on key health issues in targeted regions across the globe. ICFJ honored the winners in an awards ceremony Sept. 18 at The New York Times.

The winning entries focused on the following major topics:

Brazil: In the radio series, “Giving Birth to Pain," a team of Brazilian journalists highlight the use of unnecessary and invasive medical procedures during childbirth. Although all social classes face these problems, women of color and those living in poverty are most affected by “obstetric violence,” such as doctors pushing on mothers’ abdomens to hasten labor or performing unneeded episiotomies as a routine. The series recently prompted medical authorities to discuss how to stop these procedures. Adriana Costa, with Rádio CBN João Pessoa in Paraíba, accepted the award on behalf of the team.

India: In a series of reports, Zehru Nissa Shah reveals the dismal state of maternity care in rural areas in the state of Kashmir. In "Miscarriage of Rural Maternity Services," she reports that 44 of the state’s 60 largest hospitals have only one obstetrician-gynecologist, and no one to back them up on weekends or evenings. In another article, “At Overburdened LD Hospital, Patient Privacy a Casualty,” Shah describes how two or three mothers are forced to share a hospital bed, while newborns are housed in corridors, leading to the spread of infections. After her stories were published, government health officials told Shah they are planning to have gynecologists on duty 24/7 at some hospitals. Shah is a senior correspondent at the newspaper, Greater Kashmir.

Ghana: In his documentary, “Next to Die,” Seth Kwame Boateng reports on the overcrowded and unsanitary conditions at a teaching hospital. Medical professionals at the hospital reported that a fifth of babies delivered at the hospital die there, outpacing Ghana's already-high newborn mortality rate of 32 out of 1,000 babies. A new hospital has been in the works since 1974, but has been halted for political reasons. Boateng's documentary spurred immediate action. He teamed up with the country's first lady and ran a campaign that raised $2 million for new facilities. He estimates the centers should reduce the number of newborn deaths by approximately six babies a day. Boateng reports for the Multimedia Group Limited – Joy News.

China: Dandan Li, in “The Pain of Childhood Cancer,” revealed that incidences of malignant tumors are on the rise among children in China. Doctors often diagnose them after the window for successful treatment has closed. She pinpoints the medical and bureaucratic changes needed to improve the prognosis for the country’s youngest cancer victims. Government and hospital officials have since held closed meetings to determine how they can better help child cancer patients, and readers have made donations to the families. Li, who published an accompanying piece called “A Childhood with Chemo,” is a senior correspondent for the newspaper, Beijing News.

Russia: A 15-person team at the independent Novaya Gazeta in Moscow produced an in-depth, multimedia series on the widespread scourge of hepatitis C in Russia. The country’s blood banks did not test for the blood-borne disease until 1996. Health care advocates now believe there are nearly 6 million victims. The stories, including “‘C’ for Community,” and “Georgian Lullaby,” focused on the victims and activists who raised government awareness of a previously ignored problem. Armed with the reporting, activists in July sent a petition to national health officials to request that the government establish a hepatitis C program and improve access to modern treatments. Nadezhda Mironenko accepted the award on behalf of the team.

Benin: Kolawolé Boniface Biaou, in his broadcast, “Doctors in the Village: A Shield Against the Fatality of the Death of Children and Women,” highlights how a new partnership is helping to improve medical care in disadvantaged rural areas. Under this partnership, local communities are responsible for construction of health care centers that can serve as a hub for medical care. The Benin government, along with the French authorities, then provide those communities with doctors and medical supplies. Staffed with a licensed physician on permanent duty, these centers are helping to reduce preventable deaths, especially among women and children. Biaou is a journalist with Office de Radiodiffusion et Télévision du Bénin.