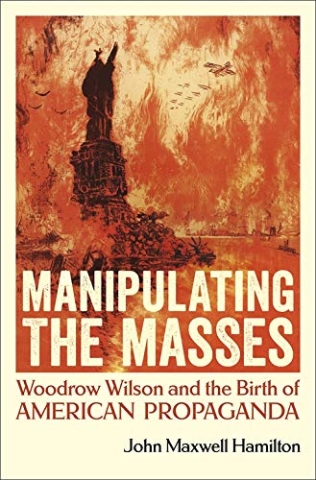 In 1917, a little-known U.S. agency called the Committee on Public Information (CPI) was created to convince Americans to back President Woodrow Wilson’s entry into World War I. The CPI launched a massive campaign to influence public opinion on a scale never witnessed before. While the organization lasted a mere 18 months, it laid the groundwork for U.S. government officials to routinely shape public opinion in peace as well as war.

The revelations are documented in a new book by journalism professor and author John Maxwell Hamilton called "Manipulating the Masses: Woodrow Wilson and the Birth of American Propaganda." As Hamilton puts it: “Every element of modern-day propaganda has its roots in the CPI.”

In an interview with ICFJ, Hamilton spoke about how propaganda became a systematic and pervasive instrument of the U.S. government. He also explained how it differs from modern-day disinformation and how the role of journalists is to cut through the spin. (Disclosure: Hamilton is treasurer of the ICFJ board of directors.

What tactics did the CPI employ to lobby Americans to support the war?

The CPI used every form of communication at hand. They recruited the best artists in the country to make posters. They recruited leaders in the advertising industry to put ads in newspapers and magazines. They enlisted universities to write pamphlets. They had a cartoon bureau. They recruited journalists to write articles that could be syndicated, in addition to making press releases a quotidian feature of government. They used Boy Scouts to deliver information. Traveling salesman. The list goes on and on.

The CPI also created an international news service that is the beginning of Voice of America (VOA) and more generally a forerunner of what is today called public diplomacy. For the first time in history, staff in embassies did not just try to persuade opinion leaders, but to persuade the public.

Here's one example of how enterprising the CPI was: it convinced local volunteers to speak at movie theaters during intermission, when the film reels were being changed. At the end of the war, there were 75,000 of these so-called “four-minute men.”

It was a very powerful propaganda technique, and it is very much like social media today. You look at your phone to find a sports bar, but a message comes from the Republican National Committee or some other group.

Why do you conclude that these efforts were undemocratic?

When the government propagandizes, it is seeking to persuade you to do or believe something. Propagandists often think that what they want to do is good for you. And a propagandist can be above board by trying to tell you the reasons you should do something. They just try to inform you. That isn't necessarily bad.

But what if the government appeals to emotion, to fear or hatred? When they get you to hate the enemy, to make you afraid New York City will be bombed by German planes – which is depicted in one of the CPI posters – then it's not democratic. You're not giving people the facts. You are manipulating them.

What were some of the most surprising findings?

So the book is a bigger story than just the CPI. It's about a larger trend in the management of public opinion, which begins at the end of the 19th century and exists up until today.

The lesson of that is that propaganda is very seductive. Although every propagandist claims to be fact-based and democratic, they often take the easy route: They shortcut democratic processes to get the result they want.

Is there a difference between the propaganda promoted by the CPI and the disinformation on social media today?

Disinformation is a form of propaganda, but the CPI didn’t use disinformation in the sense of putting out information or stories that were completely concocted. The CPI did not create fake documents.

They did occasionally use front organizations to reach immigrants, people in labor, foreign audiences with information that was tendentious and that told only one side. It wasn't a bald, made-up story, but the stories were often embroidered. They were dishonest, or non-transparent, which is a form of lying, by working through organizations without saying they were doing so.

There were disinformation campaigns like today’s before the World War, and the CPI was dragged into one in Russia that encouraged Americans to think that the Bolsheviks were not a legitimate government. It had all the elements that you would expect of a disinformation campaign: The documents were bogus, but they were based to some extent on information that was true. And people found confirmation bias in them.

In what ways has disinformation changed since the early 20th century?

Today’s disinformation is different in several key ways. First of all, technology has made it possible for information to  move much more quickly. It's a lot easier to put out disinformation and then have it spread quickly. Also, because of our ability to analyze what people think, we now have techniques to shape disinformation in a way that is more likely to resonate with the public.

How did journalists cover the CPI?

It's really quite complicated. And the reason for that is the press was very supportive of the war. There were elements of the press – the immigrant press, German-language press, for example, and socialist press or press on the left – that objected to the war. But mostly the press was behind the war.

At the same time the press resented the CPI. Before, there had been press releases, but the CPI turned what had been a trickle of press releases into a firehose of them. All of that information annoyed the press, because they had to cope with it all. They also didn't like the fact that George Creel (the head of the CPI) was heavy-handed, and they didn't like that the CPI was often berating them for things they wrote.

But they also came to depend on the CPI because they couldn't cover what had become a massive government. And so they became tethered to the press releases, the handouts. Having to deal with them actually, to some extent, curtailed their ability to do enterprising reporting.

Yes, what happened then is important because this is what we see today. The number of journalists has declined in Washington, for example, and the ability to cover Washington has become circumscribed because we not only have fewer journalists but also they have less time to do the job because of the need to file on multiple platforms, which takes time away from going out to find news.  Meanwhile, the government becomes much more adept at by-passing the press to get its message out.

What are the problems with the way the U.S. government dispenses information today?

In many respects, government information is a crown jewel for the United States. We have an information-heavy government. The problem on the other side is that the government has so many tools that can be used to subvert the democratic information process. Too often, the executive branch uses taxpayer money, not to inform somebody about what a policy is, but to try to persuade people to accept that policy. It is fine for the president to argue for a policy. That is essential in a democracy. But should the Department of Health and Human Services be allowed to spend $700 million trying to persuade you to support Obamacare? I would argue that the answer to that is no.

Unfortunately, the laws that we have in the U.S. to govern what the president, what the White House, what the executive branch can do and can't do are very, very murky. In fact, we don't even have a good definition that distinguishes between publicity and propaganda. We need to step back and look at government information and find ways to understand how much is being put out and how we fence back the type of information – propaganda – that is at odds with democracy.

What is the role of journalists in cutting through government spin?

Look at all the propaganda around the world. All the political turmoil caused by this. Without any qualification, journalists are more important than ever to cut through this. To the extent that there are more tools for the government to manipulate us, the solution is more journalism. Journalists who speak truth to power, because their publics depend on it.

It's a bigger challenge right now in many of the countries where ICFJ works because they don't have the protections that journalists have in the U.S. Every year, when we look at the ICFJ award winners, we realize that their courage far surpasses the courage of American journalists because of what they have to do.