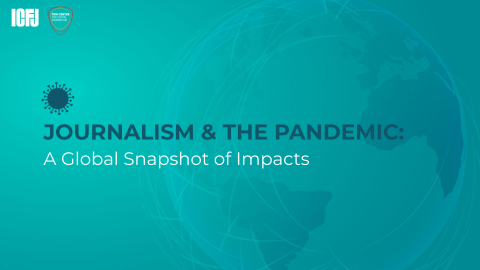 Facing everything from a barrage of disinformation to heightened security risks and a mental health crisis, journalists around the world are contending with myriad daunting challenges as they report on a deadly pandemic, according to the first results from a global survey on journalism and the COVID-19 crisis.

The International Center for Journalists (ICFJ) and the Tow Center for Digital Journalism at Columbia University launched the Journalism and the Pandemic Project in April 2020 to study the impacts on the field worldwide. Based on survey responses from more than 1,400 English-speaking journalists in 125 countries, the first report from the project surfaces alarming obstacles and threats confronting journalism during the first stage of the pandemic.

Among the most troubling findings is the identification of politicians and elected officials as top sources of disinformation by nearly half of our respondents (46%), highlighting a serious lack of trust in governments. At the same time, nearly one-third said they were relying more heavily on government sources and official statements to report on the pandemic.

In a related key finding, Facebook was identified as the most prolific spreader of disinformation by respondents (66%). Yet 32% said they were more reliant on social media platforms to connect with audiences.

Other red flag-raising findings for journalists covering the ongoing crisis:

But the picture is not all bleak. Despite the challenges, journalists indicated that they have some reasons for optimism:

The report is the first of a data-driven research series (which will also draw on surveys conducted in six other languages) that will address the challenges of reporting on COVID-19 and offer guideposts for reimagining a post-pandemic future for journalism.

The Journalism and the Pandemic Project is supported by global philanthropic organization Luminate, and the Committee to Protect Journalists (CPJ) is a partner organization.