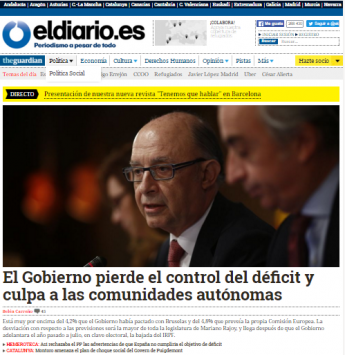 Amid all the bad news about business models for high-quality journalism, eldiario.es ("The Daily") in Spain shows that good journalism can be good business.

Its founder and CEO, Ignacio Escolar, just announced that the publication finished 2015 with revenues of US$2.6 million, up 33 percent on the year, and a profit after taxes of US$235,000.

Although the digital publication is free, its 14,500 "partners" (socios) pay at least US$66 a year to get access to the news a few hours ahead of everyone else, as well as ad-free pages, discounts and invitations to events.

Those partners brought in about a third of eldiario.es' revenues, "And they allow us to remain independent," Escolar said in his announcement. Although advertising brings in more revenue, no single advertiser comes close to bringing in what the partners do, so none has enough leverage to influence editorial decisions, he said.

Escolar, 40, had worked in television and as the founding editor of the daily newspaper El Público before launching eldiario.es in 2012 with US$440,000 and a handful of independent-minded journalists.

The staff has grown to 54, and they have gained a reputation for investigative journalism that uncovers corruption among political and business elites, who traditionally have been protected by a compliant press.

One of eldiario.es' major scoops showed how dozens of board members of a failed savings and loan company that received a taxpayer bailout of US$25 billion were using their company credit cards for luxury goods, personal vacations and other non-business expenditures while ignoring management misfeasance.

A recent follow-up scoop included publication of text messages between an S&L executive accused of fraud in the case and and the royals, King Felipe VI and Queen Letizia, which show them sympathetically defending the executive against negative press coverage. 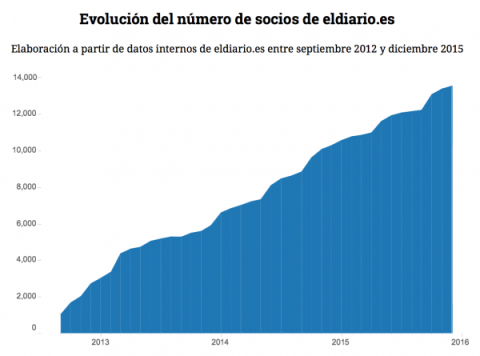 This kind of transparency and level of detail about financial results and ownership of eldiario.es is rare in Spain. The transparency is designed to emphasize editorial independence, because the publication clearly has a progressive political agenda that favors human rights, income equality, justice and fairness.

In an interview with me a year ago, Escolar said that the difference between his publication and others on the left is that his has no connection to a political party nor does it support one.

He combines idealism with pragmatism. "Journalism is a public service, not a business," he said at the time, "but it is a public service that has to be profitable." So he focuses much of his attention on making it sustainable. High-quality journalism cannot be produced by volunteers; it needs money behind it, he said.

As it happened, at the same conference last year in Huesca where Escolar spoke about eldiario.es, his father, Arsenio Escolar, editor of the news publication 20minutos, "stuck a finger in the eye" of Spanish journalism by handing down 10 commandments for his colleagues. Among them: "We need journalism that is critical, fair, transparent, distant from power, ethical and social," said Escolar.

You could say that Ignacio Escolar is a chip off the old block.

This post originally appeared on James Breiner's blog News Entrepreneurs and is republished on IJNet with permission.