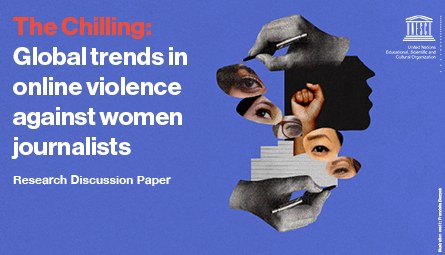 Our new research is drawing much-needed attention to the escalating scourge of online violence against women journalists, as major news outlets across the world report on the findings, and women journalists share details of the abuse they face. ICFJ conducted the study, which was commissioned and published by UNESCO.

Al Jazeera, the BBC, CNN, France24, the Observer, the Independent and Le Monde are among more than a dozen outlets that have covered “The Chilling: Global trends in online violence against women journalists,” since it was published April 29. The Guardian called the report “horrifying reading” in an editorial, declaring that the issue must be urgently addressed. The Washington Post published an op-ed on World Press Freedom Day by ICFJ’s Global Director of Research Julie Posetti - the study’s lead author - and Maria Ressa, the CEO of the news outlet, Rappler, in the Philippines and the subject of a case study in the report.

The research shows that online violence that seeks to silence women journalists and discredit their reporting is a growing problem that is often tied to orchestrated disinformation campaigns. Researchers also found that because of racism, homophobia and religious bigotry, some women face particularly frequent and vitriolic attacks.

Twenty-four researchers led by Posetti interviewed 173 international journalists and experts across the world for the study. They also drew from a global survey of 900 journalists from 125 countries, and a big data analysis of over 2.5 million social media posts directed at Ressa and Carole Cadwalladr, a British investigative journalist and columnist.

Nearly 95 percent of the journalists interviewed for the study went on the record. Many are sharing the findings as well, including Cadwalladr, Tara John of CNN, Nadine White of the Independent, and Marianna Spring and Rianna Croxford of the BBC. In addition, news publishers, editors, technology companies and intergovernmental organizations have approached Posetti and her research team to learn more, while many women journalists have contacted Posetti and colleagues privately to share their stories.

In their op-ed for The Post, Posetti and Ressa wrote that much more needs to be done: “These [women] journalists are both the primary targets of online violence and the first responders to it, and until that is reversed — until tech companies, political instigators and media employers are more accountable — effective solutions will remain elusive.”

The research is part of a major book-length study that will be published by UNESCO in the coming months. UNESCO and ICFJ published the first findings in December, drawing attention from outlets such as the Columbia Journalism Review, Al Jazeera, Deutsche Welle, the Independent, Inter Press Service and Voice of America.

The Toronto Star’s public editor, Bruce Campion-Smith, wrote at the time that the research prompted him to ask his women colleagues about their experiences, and more than three dozen gave feedback. “What I heard was sobering and depressing,” he wrote. “Editors need to understand the scope of the problem, be mindful of the stories likely to spark a backlash and support reporters when it happens.”

In March, ICFJ released a case study focused on Ressa’s experience with online violence. The Washington Post in an editorial called the attacks on her “a worldwide warning.”