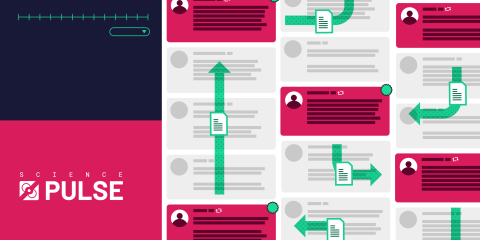 A project of ICFJ Knight Fellow Sérgio Spagnuolo, Science Pulse aggregates English, Spanish and Portuguese social media posts from scientists, scientific organizations and other experts in its database. Rather than wade through Twitter and Facebook feeds, journalists can now use Science Pulse’s tools to stay on top of the latest research and other scientific news shared on social media. Science Pulse offers users four main tools -- a newsletter, website and Twitter and Telegram bots that automatically find and share prominent scientific news with users.

Today, Science Pulse’s database of social media posts includes over 2 million tweets, drawn from 1,600 scientists and scientific organizations. Since launching in July 2020, more than 4,500 people have used its services.

"The mapping done by Science Pulse is very relevant,” said Thiago Medaglia, founder of Ambiental Media and a Science Pulse user. “In social media everything is diluted, especially with the heat of discussions, and information is very easily lost. Science Pulse is able to gather what is really relevant within a subject.”

Spagnuolo launched Science Pulse in response to the pandemic, as health experts shared new and rapidly changing information every day. Spagnuolo, a data journalist and technologist, said journalists were struggling to find the right sources of scientific information.

"When there's a lot of information ― and, worst, misinformation ― on social media, it is important to rely on scientists, experts and science disseminators who are trusted by their peers,” he said.

“It’s an easy way for journalists to interact with us since all they have to do is scroll through their timeline,” said Jade Drummond, community manager for Science Pulse. “It’s a constant reminder for those who follow us.”

With its Facebook database, journalists can look at popular posts from Science Pulse’s vetted list of experts within the last 24 hours. Their newsletter is also a way to receive news right to your inbox. It connects journalists with relevant information in the science field, including trending topics and new sources.

“It is helpful that Science Pulse has a list of experts that is updated regularly,” said Luiza Caires, science editor at Journal da USP. “If I were using only my own list of experts, it would be fixed, and soon I would miss out on important information from additional specialists.”

Science Pulse tracks social media posts from a wide range of influential figures and organizations, from Brazilian epidemiologist Octavio Ranzani to international medical journals like The Lancet, to globally-recognized organizations like the National Institute of Health and John Hopkins University.

Science Pulse is a collaboration with Volt Data Lab, a data-driven news agency Spagnuolo founded in Sao Paulo, Brazil. The project is supported by ICFJ and by the Brazilian science journalism agency Bori.

Science Pulse started with a focus on the field of science, but Spagnuolo is already expanding it to other fields including politics, finance, privacy, environment and journalism.

The ICFJ Knight Fellowships instill a culture of news innovation and experimentation worldwide. They are supported by the John S. and James L. Knight Foundation. Learn more.