The fellowship came at the perfect time. Upon arriving, Germany would soon be the epicenter of the biggest story happening around the globe: the Syrian refugee crisis. I was able to witness and report on the situation firsthand, gaining background and perspective useful well beyond the duration of the fellowship.

Applications for the 2022 Fellowship have now closed. Thanks to all those who applied.

ICFJ’s longest-running program, the Arthur F. Burns Fellowship provides talented young U.S., German and Canadian journalists the opportunity to live and work in each other’s country. This highly personalized and practical program improves the quality of news coverage in each country and strengthens the transatlantic relationship.

Among the mid-career journalists reporting on international affairs in Germany today, at least half are Burns alumni. Many U.S. alumni, who began in small community news organizations, have moved to positions of greater influence and breadth.

In one evaluation of the program, more than 90 percent of alumni respondents said the program enriched their careers. More than 80 percent of Burns alumni have been promoted or joined other organizations in more senior positions. More than 40 Burns alumni now work as foreign correspondents in 20 countries for well-known news outlets, such as The Washington Post, Reuters, CNN, ARD, Deutsche Welle and the Süddeutsche Zeitung.

The fellowship’s broader significance is in its contribution to the quantity and quality of news coverage of Germany, the United States and Canada. Each recent class of fellows has produced more than 225 stories during its time across the Atlantic. Fellows represent every type of media outlet, from The Wall Street Journal, the Globe and Mail, The Seattle Times and NPR, to the Frankfurter Allgemeine Zeitung, ZDF and Der Spiegel. They come from across each country and cover the spectrum of different beats. Their influence on readers, viewers and listeners is diverse and far-reaching.

As fellows learn firsthand about their host country and media outlet, they write stories and produce broadcast programs for both host and home audiences. When they return home, they share their experiences with colleagues and continue to cover current events, using their new skills, contacts and a deeper understanding of international relations.

Before individual fellowships begin, all participants attend a one-week orientation in Washington, D.C., during the last week of July. Fellows attend meetings with prominent media and government representatives and discuss professional issues. The orientation fosters a spirit of community among the participants and gives a foundation for understanding transatlantic relations.

Following the orientation in Washington, North American fellows participate in intensive, two-week language training at institutes in their host cities, while German fellows precede directly to their host media. Over the next two months, fellows work as temporary staff members at host newspapers, magazines, and radio and television stations. In addition to covering local news, fellows report on events for their employers back home, while learning more about their host country and its media.

Apply to the Fellowship

Applications for the 2022 program have now closed. Thanks to all those who applied.

This competitive program is open to U.S., Canadian and German journalists between the age of 21-40, who are employed by a newspaper, news magazine, broadcast station, news agency or who work freelance and/or online. Applicants must have demonstrated journalistic talent and a strong interest in North American-European affairs. Applicants should have two years of professional, full-time journalism experience. German language proficiency is not required, but it is encouraged. 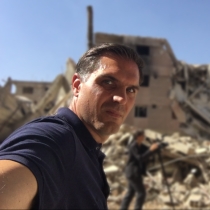 After my Burns fellowship with ICFJ, CNN hired me for their Berlin bureau.