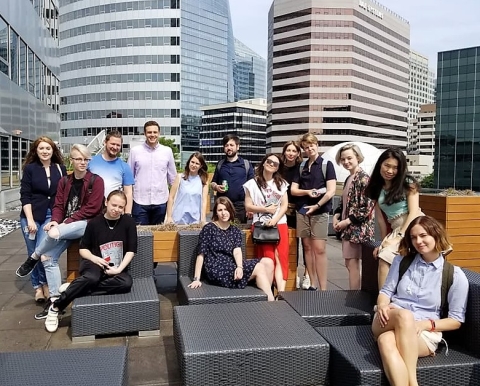 The International Center for Journalists (ICFJ) invites young journalists from Russia to take part in an exchange program, the “Journey of Shared Discovery for Russian and American Journalists – Round Four.”

The new program will build on the successes of earlier annual exchange programs whose goals were to allow Russian and American journalists to build professional relationships and friendships with one another and mutual understanding while dispelling negative stereotypes between their countries. The journalists accomplished these goals while learning firsthand about the media system of each country, including the ways that digital media are changing the ways that journalists work today.

Twenty-one journalists, who will be selected in competition, will come to the United States for a program from Tuesday, June 4, to Tuesday, June 25, 2019. Applicants must speak English.

Here are some highlights of our most recent exchange programs:

The program is supported with a grant to ICFJ from the U.S. Embassy Moscow, Public Affairs Section (PAS). During 2018, ICFJ brought thirteen Russian journalists to the United States to take part in Round Three of this program with support from a PAS grant.

About the Exchange Program

ICFJ is accepting applications from qualified journalists and freelancers from throughout Russia.

The program will begin with an orientation and schedule of meetings in Washington, and individual assignments of two weeks for each journalist in an American newsroom.

The selected journalists will be expected to publish stories, blog posts and use social media during the program.

Because the program will include individual two-week assignments at U.S. media organizations, the Russian journalists must speak English.

Apply to the Program

Selection will be based on professional qualifications, relevant experience and commitment to the program goals and to enhancing mutual understanding between the people of each country. For more information, please contact ICFJ’s Bob Tinsley or Amal Azimova.