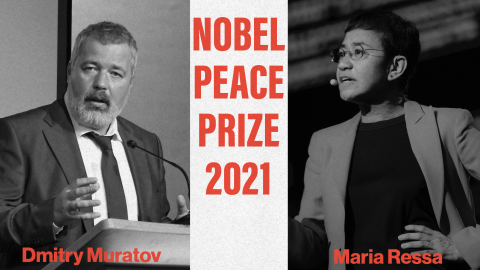 Washington, DC -- October 8, 2021 -- The International Center for Journalists lauds the awarding of the 2021 Nobel Peace Prize to two icons of the global fight for press freedom, including a former winner of ICFJ's top international journalism award.

Maria Ressa of the Philippines and Dmitry Muratov of Russia today were named laureautes of the prestigious prize, “for their efforts to safeguard freedom of expression, which is a precondition for democracy and lasting peace."

Ressa, a longtime CNN reporter and a 2018 recipient of the ICFJ Knight International Journalism Award, co-founded the independent news site Rappler - one of the few news outlets in the Philippines taking on the government of President Rodrigo Duterte over its human rights abuses. Today, after being convicted on a trumped-up charge in 2020, she faces a slew of other state-linked legal cases aimed at silencing her and her colleagues.

Muratov is the co-founder and longtime editor-in-chief of Novaya Gazeta, an independent newspaper in Russia that works with the Organized Crime and Corruption Reporting Project (OCCRP), an ICFJ partner. Novaya Gazeta journalists have taken part in ICFJ programs over the years, and investigative reporter Roman Anin worked there when he received the ICFJ Knight Award in 2013. Six Novaya Gazeta journalists have been killed since Muratov co-founded the news outlet in 1993, including Anna Politkovskaya, once a leading voice reporting on the Chechnya war.

“Maria and Dmitry hold power to account, fearlessly, and in the face of large-scale, coordinated attacks to silence them,” ICFJ President Sharon Moshavi said. “They epitomize the best and bravest in journalism. This prize recognizes that, and is a testament to the importance and power of great journalism.”

While announcing the prize in Oslo, Berit Reiss-Andersen, chair of the Norwegian Nobel Committee, said: "Free, independent and fact-based journalism serves to protect against abuse of power, lies and war propaganda.”

She called Ressa and Muratov “representatives of all journalists who stand up for this ideal in a world in which democracy and freedom of the press face increasingly adverse conditions.” The committee’s choice underscores “the importance of protecting and defending these fundamental rights,” she added.

ICFJ, working with Rappler, published a big data case study earlier this year that detailed the intensity and ferocity of online violence — from death threats to doxxing — aimed at Ressa over a five-year period. The research found evidence that some of the attacks on Ressa are coordinated or orchestrated — a hallmark of state-led disinformation campaigns. At one point, in response to an investigation on state-linked disinformation, Ressa recorded more than 90 hate messages an hour on Facebook.

Ressa continues to fight a slew of charges and lawsuits in the Philippines, and she is forbidden to travel. She faces the prospect of decades behind bars if convicted on all counts. ICFJ and the #HoldTheLine Coalition continue to call for these spurious charges to be dropped. ICFJ co-leads the coalition, a group of more than 80 groups advocating for Ressa and press freedom in the Philippines, alongside the Committee to Protect Journalists (CPJ) and Reporters Without Borders (RSF).

In her 2018 speech accepting the ICFJ Knight Award, Ressa urged journalists and activists to stay the course.

“Sometimes, people say you're naive or foolish. People say that about us. We're not,” Ressa said. “These times require that. Without hope, we have no energy to move forward. We have to take the long view, work together and know we are not alone. This is a global battle.”