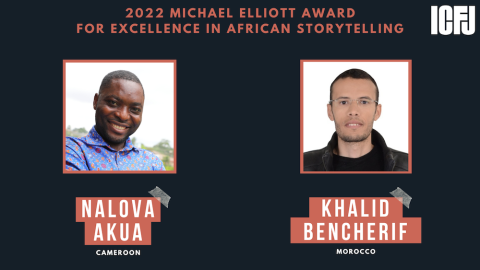 A journalist who spotlighted the devastating effects of an invasive plant on Cameroon’s Lake Ossa and another who chronicled how rising temperatures in his Moroccan hometown have prompted mass migration are the 2022 winners of the Michael Elliott Award for Excellence in African Storytelling. Through compelling reporting and writing, the journalists illuminated the toll of climate change on people and their livelihoods.

Nalova Akua’s winning entry for BBC Future Planet, “The Invasive Weed that Traveled the World,” examines how a fishing community in Cameroon is racing to save Lake Ossa, one of the country’s largest, from an invasive plant that thrives in warm freshwater. Akua, who reports for a variety of print and digital outlets, explains the importance of the lake for the local communities and the ecosystem, how its plight is connected to climate change, and the creative ways community members are trying to save it.

Khalid Bencherif, whose reporting focuses on environmental, social and political issues in the Middle East and North Africa, wrote a gripping story for In These Times, “How Climate Change Turned This Moroccan Village into a Ghost Town.” He describes how parts of Morocco, including his hometown, are now uninhabitable due to climate change. In vivid details that weave his personal story together with factual reporting, Bencherif exposes the connection between rising temperatures in North Africa, subsequent desertification, and forced mass migration.

The International Center for Journalists (ICFJ), in partnership with the ONE Campaign and the Elliott family, give out the prestigious award. It was established in 2016 in honor of Michael Elliott, an outstanding editor and philanthropist whose life was a testament to the power of storytelling to bear witness to and improve the human condition.

The prize aims to advance the work of emerging journalists in Africa who strive to strengthen people’s voices and improve their well-being. Previous winners include Mercy Juma and Dorcas Wangira of Kenya; Bernadette Vivuya of the Democratic Republic of the Congo; and Abubakar Ibrahim, Kiki Mordi and Zainab Bala of Nigeria. These talented journalists have uncovered child labor in mines, exposed sexual harassment in universities, the fight against female genital mutilation, and more.

Akua and Bencherif will receive a cash prize and take part in a customized professional development program at The Economist headquarters in London.

“Through powerful storytelling, Nalova Akua and Khalid Bencherif shone a light on complex issues of global importance – the effects of climate change on people’s lives,” said Emma Oxford, Michael Elliott’s widow. “I am grateful to our many individual donors, as well as to The Economist, who have made it possible to recognize these and other courageous journalists with the award over the past six years. I warmly congratulate this year’s winners and wish them much success.”

“The award is a fitting tribute to Mike Elliott, and a brilliant reflection of the richness of storytelling talent in Africa,” said Daniel Franklin, executive editor of The Economist. “This initiative to support rising journalists goes from strength to strength, and The Economist is delighted to continue to support its expansion.”

Lionel Barber, former editor of the Financial Times and author of The Powerful and the Damned, chaired the international panel that selected Akua and Bencherif from among 150 applicants. The judges included:

Elliott served as a top editor at The Economist, Newsweek, and Time before becoming CEO of ONE. A passionate writer and editor with a gift for unraveling complex issues, he shone a light on global development issues and the people at their center. A longtime board member of ICFJ, Elliott championed great journalism as a tool for empowerment. As ONE’s CEO, he lobbied to improve the lives of all Africans. Shortly before his untimely death in 2016, Elliott spoke of his dream to establish an award that would bring together his belief in great journalism with his commitment to progress in Africa.