Join the ICFJ Tribute to Journalists on Nov. 10, in person or virtually, to honor Chernov, Maloletka, Stepanenko and other intrepid reporters from across the world.

In late February, as a full-scale invasion of Ukraine by Russia loomed, AP journalist Mstyslav Chernov and freelancers Evgeniy Maloletka and Vasilisa Stepanenko prepared to travel to what they believed would be a key target for Russian forces: the port city of Mariupol on the Black Sea. 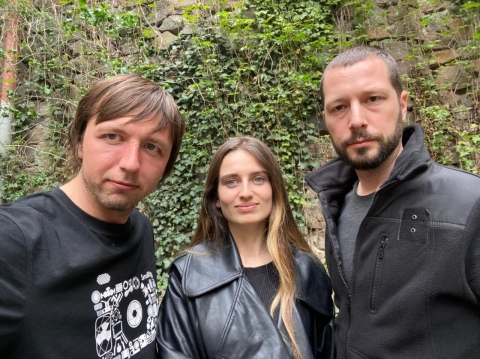 They arrived at 3 a.m. on February 24. The invasion started an hour later. “We decided to do a story just before the [invasion] on how to prepare for the war. And then the war started,” said Maloletka.

By early March, the Russians had encircled Mariupol. Chernov, Maloletka and Stepanenko reported for 20 days amid the siege of the strategic port city, documenting some of the most brutal events of the invasion’s early stages as Russia relentlessly and indiscriminately bombed and shelled Mariupol.

They covered the struggle of everyday Ukranians to survive as the city was slowly strangled to death, and the lifesaving work of a prominent volunteer medic later captured by Russia. Most famously, Maloletka’s photo of a wounded pregnant mother being evacuated on a stretcher brought worldwide attention to the bombing of a maternity clinic. Both the mother and her unborn child later died.

After three weeks of non-stop reporting, and as the last escape routes out of Mariupol collapsed amid the deteriorating conditions, Ukrainian soldiers and a local family smuggled Chernov, Maloletka and Stepanenko — and their footage — out of the city.

“If they catch you, they will get you on camera and they will make you say that everything you filmed is a lie,” Chernov recalled one Ukrainian policeman telling him. “All your efforts and everything you have done in Mariupol will be in vain.”

Chernov and Maloletka both began their journalism careers at a time of hope for Ukraine’s future. The 2013-14 Euromaidan revolution led to the ouster of pro-Russian president Viktor Yanukovych and a political turn for the country toward the European Union.

Only a couple months later, however, Russia invaded and illegally annexed Crimea, and ignited a secessionist conflict in the country’s eastern provinces of Donetsk and Luhansk. Chernov and Maloletka soon found themselves reporting on these conflicts. “A lot of Ukrainian photojournalists and documentary photojournalists — we just automatically became war photographers,” said Chernov.

He and Maloletka covered the war in Donetsk and Luhansk, and later other global crises, from the Nagorno-Karabakh conflict in the South Caucasus to the Battle of Mosul in Iraq and the COVID-19 pandemic in Ukraine.

The younger Stepanenko, meanwhile, was working as a freelancer in her hometown of Kharkiv in the months leading up to Russia’s full-scale invasion. She had just recently graduated from journalism school. From a young age, she knew she wanted to be a journalist; at just five years old, she would recount political news stories to her family over dinner.

Like Stepanenko, Chernov is from Kharkiv, Ukraine’s second largest city, which lies not far from the Russian border. Maloletka is from Berdyansk, next door to Mariupol. Their hometowns, all in eastern Ukraine, would become targets of the Russian military when it invaded the country.

The last journalists in Mariupol 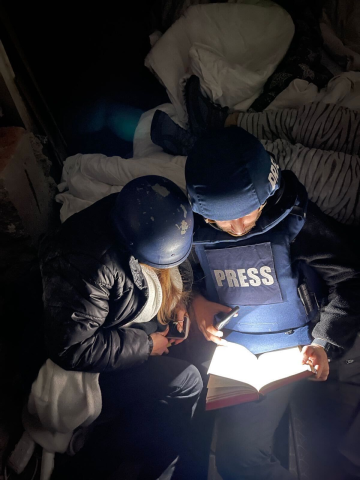 As residents and other reporters fled the besieged Mariupol, Chernov, Maloletka and Stepanenko stayed behind. Facing restricted phone and internet connection, diminishing supplies of food, drinking water and power, and the constant threat of shelling and sniper fire, they served as witnesses to the intense suffering of Ukraine’s civilians — including the deaths of children, as a result of Russia’s indiscriminate war tactics.

“What happened in Mariupol, it was the worst thing I can imagine, that I’ve [ever] seen in my life. It was really important to show the world what was happening,” said Stepanenko. “It was really terrible, but I understood that I was in the right place at the right moment.”

While inside Mariupol, the three journalists chanced Russian shelling to report their stories via satellite phone in the few places they could find a connection. The stories and images they produced appeared on front pages and in newscasts across the world, serving as a powerful counter to Kremlin denials of atrocities carried out against civilians by the Russian military. Their reporting found its way to the floor of the U.N., where U.S. Ambassador to the U.N. Linda Thomas-Greenfield cited their work in reference to the “terror that Russia is inflicting across Ukraine on the Ukrainian people.”

This kind of reporting demands that journalists be on the ground despite the safety risks, said Maloletka. “What we see and what raw propaganda tells [us] can be opposite. Then you can compare,” he said. “All of these accounts show the brutality [of Russia]. I can tell you this is the situation [of what] Russian troops are doing.”

In response to their reporting, Russia accused the journalists of “information terrorism.” Russian soldiers reportedly hunted Chernov, Maloletka and Stepanenko, too, with the intention of forcing them to renounce their stories. The journalists made their escape from the city only after being cornered in a hospital by sniper and tank fire.

“I know that we saw these crimes by ourselves, and then [Russian] propaganda said something different,” Stepanenko said of their reporting. 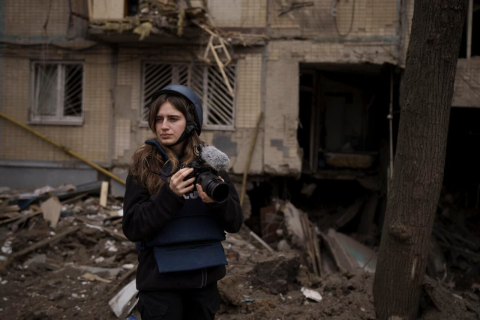 A day after the journalists escaped Mariupol in mid-March, Russia blasted a theater being used as a bomb shelter, killing more than 600 civilians, including children. Painted letters on the pavement outside the theater had even read “CHILDREN,” plain to see from the air.

The brutal siege of the city would continue another two months — Mariupol eventually fell on May 20, after the last Ukrainian defenders, barricaded inside the Azovstal steel plant for weeks, surrendered.

The horrors of Mariupol may have faded from the consciousness of audiences outside Ukraine in the wake of more recent reporting from the war's frontlines. But Chernov, Maloletka and Stepanenko continue to report from Kyiv on the now-Russian occupied city, as well as other occupied or recently liberated parts of Ukraine.

“Now, the audience has almost forgotten about Mariupol. We don't let it go,” said Chernov, adding that he and his fellow ICFJ Knight International Journalism Award winners are following up with some of their sources there about life in the city today. “We are currently working on another story from Mariupol and how this city will manage the winter without water, electricity, gas. We want to [report on] Mariupol as much as possible.”

As the Russian invasion continues into its ninth month, Chernov, Maloletka and Stepanenko stressed the urgency of keeping the world’s attention on their country, and especially on the atrocities committed by Russia against civilians as in Mariupol.

“It’s important to remember about it because it's kind of a blueprint of what will happen to any city that Russia takes over. [Mariupol] is an example, and it's a symbol at the same time,” said Chernov. “It’s important all the time to highlight the problem of Ukraine, because this war is happening to our Ukraine — to our friends and relatives."