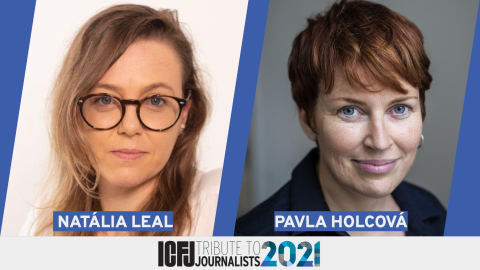 The International Center for Journalists will present its 2021 ICFJ Knight International Journalism Awards to Natália Leal, a Brazilian fact-checker who debunked deadly misinformation in that pandemic-ravaged country, and to Pavla Holcová, a Czech reporter who courageously carried on an investigation after the murder of a fellow journalist.

Leal is the head of content at the pioneering Agência Lupa fact-checking outlet in Brazil. Over the past year, she and her team have exposed disinformation spread by President Jair Bolsonaro and others. She also created an award-winning data-visualization tool called “At the Epicenter,” showing the magnitude of the COVID-19 toll in Brazil. The innovative tool inspired The Washington Post to replicate the project for the United States.

Holcová is an investigative journalist from the Czech Republic who was working with Slovak colleague Ján Kuciak on a story exploring links between the Italian Mafia and the Slovak government. After Kuciak and his fiancee were brutally murdered in 2018, the grieving Czech reporter vowed to carry on the project – and her reporting for the Organized Crime and Corruption Reporting Project (OCCRP) contributed to the downfall of the Slovak government.

“These women show us how journalism is fulfilling two of its most essential functions: providing lifesaving information in the face of massive disinformation, and holding government officials to account through fearless investigative reporting,” said ICFJ President Joyce Barnathan. “Natália and Pavla have faced attacks over their truth-telling, and neither has backed down.”

Leal oversaw fact-checking at Agência Lupa at a time of rampant disinformation about the pandemic in Brazil. Bolsonaro has repeatedly downplayed COVID-19 despite the fact that at least 450,000 Brazilians have died, more than any country but the United States. Agência Lupa conducted more than 700 fact checks on the pandemic, including debunking widespread rumors that empty coffins were being buried to make the pandemic look more serious, and that more people died in Brazil in 2019 than in 2020. Those fact checks led to online attacks against Leal from the president’s supporters.

Leal is also a media innovator who co-created the “At the Epicenter” app, which simulates for a user what her neighborhood would look like if all Brazilians killed by COVID-19 were concentrated nearby. By visually clustering the number of Brazilian victims in a neighborhood or city, the user realizes how far she would have to travel from home to find another living person. TV Globo, the country’s largest network, highlighted the app in its broadcasts, greatly expanding the app’s audience. Google News Initiative funded the development of the tool.

Holcová is the founder of the Czech Center for Investigative Journalism. After the murder of Kuciak and his fiancee, Martina Kušnírová, Holcová led reporting that exposed in detail how the killings were carried out, and she made sure that the investigation into the ties between the Slovak government and the Mafia was published.

She got a leak of the police file about Marian Kočner, the oligarch alleged to be behind Kuciak’s murder. Rather than mining the data for stories herself, she shared it with dozens of Slovak media outlets. Kuciak’s murder and the investigations by Holcová and other journalists spurred mass protests in Slovakia, which toppled the government of Prime Minister Robert Fico in 2018. Her reporting also contributed to the investigation of a former general prosecutor, charges against 21 judges, and the resignation of the entire former top management of the police. Holcová carried out her investigation despite threats from politicians, trolls on social media and even other journalists.

“For many parts of the world, journalists risk their lives to do their job and for many women journalists, the conditions can be outright hostile,” said Paul Cheung, director of journalism and technology innovation at the John S. and James L. Knight Foundation. “Natália and Pavla faced threats in pursuit of the truth. Their determination to hold the powerful accountable ultimately took down corrupt officials and saved lives with essential health information.” The ICFJ Knight International Journalism Awards are supported by Knight Foundation, which funds the ICFJ Knight Fellowships.

ICFJ will present the awards at its Tribute to Journalists 2021 on Nov. 9. Two U.S. journalists will also win awards: Bill Whitaker will receive the ICFJ Founders Award for his four-decade career at CBS News, most recently as a hard-hitting but empathetic correspondent for “60 Minutes.” Anne Applebaum of The Atlantic is the winner of the Excellence in International Reporting Award for her incisive analyses of the deterioration of democracy in Eastern Europe and the former Soviet Union.

The event, emceed by CNN Anchor Wolf Blitzer, will be virtual this year because of the pandemic. Register here.

About the John S. and James L. Knight Foundation
Knight Foundation is a national foundation with strong local roots. We invest in journalism, in the arts, and in the success of cities where brothers John S. and James L. Knight once published newspapers. Our goal is to foster informed and engaged communities, which we believe are essential for a healthy democracy. For more, visit kf.org.