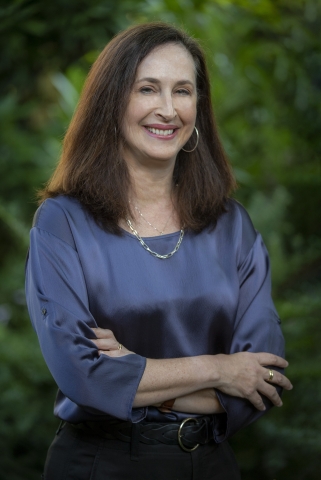 Ask Sharon Moshavi how she describes herself, and the first answer you hear is not “president” or “nonprofit executive,” but something simpler: journalist.

Before joining the International Center for Journalists in 2007, and taking the reins as president last month, Moshavi spent more than 15 years working as a reporter, including more than a decade as an international correspondent. “I still identify as a journalist, and with journalists,” she says. “My passion now is to support them as much as possible.”

It goes back to when Moshavi was an international correspondent, based in Delhi, Jerusalem and Tokyo. “Every place I was, every story, I always relied on the sources and knowledge of local journalists,” she said. “I saw firsthand how committed they were to providing their communities and the world with vital news. And many of them worked under difficult conditions, sometimes at great risk to themselves. When I had the chance to join ICFJ, it was a tremendous opportunity to give back and to support their work.”

Moshavi took on her new role at ICFJ last month, succeeding Joyce Barnathan after 15 years as president. In the interview below, she shares her thoughts on how she approaches innovation, what keeps her up at night, what’s next for ICFJ and more.

Why did you want to be a journalist, and why were you drawn to international reporting?

I grew up in Baltimore, in an environment where everyone seemed to be from somewhere else. My father was born in Central Asia, and many of my parents’ friends were also from other countries. It seemed there was always someone at our holiday parties and family dinners speaking another language, sharing a different worldview. That fired up my imagination, my interest, in the world.

I was always naturally curious, liked writing, and never (to my parents’ chagrin) driven by money, so, of course, I became a journalist when I graduated college. I actually started out covering the media industry, as a business reporter. Soon after, I had the opportunity to go overseas and report from abroad, and that was a life-changing experience. I spent more than a decade doing that – first from Delhi, covering South Asia, and then from Jerusalem, covering the Middle East, and then from Tokyo, covering the Koreas and Japan. These were formative years that shaped my outlook on journalism, and on life.

[Read a letter from Sharon]

Since you started at ICFJ, a big part of your role has been to nurture innovation in newsrooms. How do you think about innovation?

It’s never innovation for innovation’s sake. It’s “what problem are we trying to solve, and how can we solve it?” And the problems that need solving aren't always readily apparent. That is one of the keys to “good innovation”: addressing issues that most people don’t yet recognize as such. A good example is diversity. For many decades, the senior ranks of newsrooms in the West have been overwhelmingly white and male. Few people – certainly not those running these organizations – considered this a “problem.” It is, of course, and only now are we coming to terms with that.

We need to experiment and not be afraid to question all assumptions. Reporters apply that mindset to their sources and stories all the time – we need to take that same mindset and apply it to the profession itself.

The historian Will Durant said, “There’s nothing new but the arranging.” When it comes to innovation in journalism, a lot of it involves working with existing building blocks and putting them together in new and interesting ways. But that doesn’t always go quite far enough. In many ways, we need to rethink this product called journalism. We need to experiment and not be afraid to question all assumptions. Reporters apply that mindset to their sources and stories all the time – we need to take that same mindset and apply it to the profession itself.

What kind of innovation do you see happening in our field today?

Anytime I see someone trying something new, I get excited. I see a lot of really interesting innovation from the journalists in the ICFJ network and beyond – especially experiments that are fighting disinformation, engaging and building trust with audiences, and helping independent news outlets become stronger businesses.

I’m heartened when I see journalists in our network want to try new things. One example that comes to mind is artificial intelligence, which we’re all trying to wrap our minds around. In our survey about technology in newsrooms, we saw tremendous interest in learning more about AI – 42 percent of respondents from newsrooms globally. So today, we’re involved in a pilot project in India that aims to use AI to assess undercovered and overcovered stories.

And, of course, we’re seeing lots of experimentation on the business side, to help independent news outlets thrive well into the future. It is a big focus for us at ICFJ. One project that is close to my heart is our IJNet Mentoring Center. I helped launch it seven years ago. It has helped dozens of media startups in the Middle East build stronger businesses, often in environments that are challenging for journalists – such as Iraq, Saudi Arabia and Yemen. It has served as a model for another sustainability program called Velocidad that we run in Latin America with our partner, SembraMedia, to support digital public interest news sites.

What keeps you up at night?

I think a lot about the “infodemic” we live in today and how journalism is so critical to eradicating it. We live in a time when people are choosing their own facts and their own realities. We have incredible polarization, calculated disinformation and inadvertent misinformation. We are living in an information hurricane. So I think a lot about how journalists can make facts matter and build trust with audiences. I really do believe journalism has never been more crucial than it is now.

If journalism is going to be trusted, it needs to reflect the communities we serve.

I also see just how great a toll the pandemic has taken on newsrooms, and I worry about the long-term consequences. So many newsrooms have been crushed, and not just financially but emotionally. There is a lot of burnout from the pandemic, fighting misinformation, as I said, and political polarization, which is a global phenomenon. So many women journalists today experience online violence – nearly three out of four, as our study with UNESCO revealed – and political actors are one of the top sources of these attacks. I worry that we are losing important voices because of this. Nearly 40 percent of women retreated from visibility after experiencing attacks, and others have quit their jobs or even abandoned journalism altogether.

I also think a lot about how we can do more to ensure a diversity of voices are providing news coverage, and not only in the reporter ranks but in senior leadership roles as well. If journalism is going to be trusted, it needs to reflect the communities we serve.

What keeps you motivated in this work?

I am inspired every day by the amazing journalists in our network – people who are starting independent news sites from scratch, helping bring down corrupt governments with their investigations, developing creative and effective ways to combat disinformation. Thousands of journalists supported by ICFJ are making a positive impact through their work, despite government pressure and other challenges.

It’s also quite motivating for me when I hear about the impact we are having, even beyond the more hands-on, intensive programs we run. For example, one email we got has stayed with me. It was from a graduating high school student from rural Iran – a country that ranks almost last in the world on press freedom. She came across our IJNet website in Persian, and said it changed her life. She said she now wanted to be a journalist and would share IJNet’s resources and guides with her college professors. This is just one example of what happens when you equip people with tools and resources in their own languages, and of the ripple effect our work can have.

What’s next for ICFJ?

A lot! The ICFJ network today is about 132,000 journalists strong. It reaches almost every corner of the world. Many of these are journalists who have participated in our programs – on media innovation, newsroom sustainability or critical-issues and investigative reporting. Others have served as trainers or are part of our active IJNet community.

My goal is to grow how we help journalists across this community to learn from and collaborate with one another. I want us to support them to maximum effect. It used to be possible for reporters to operate in silos, or lanes. Now that isn’t the case. There aren’t lanes anymore. There’s a freewheeling highway, with all sorts of vehicles moving at different speeds and heading in different directions. It can be scary at times, to be honest, but it’s also tremendously exciting. ICFJ is uniquely positioned to help journalists navigate this new world by fostering journalistic collaborations and sharing promising ideas across borders.

Our new research arm underpins all of this. By tapping into the collective wisdom and experiences of our network – examining issues such as the impacts of the pandemic on journalists, or online violence that women reporters face, or newsroom technology – we are able to find out what’s really happening broadly and deeply. We use that knowledge to shape the work we do, and also to shape the future of our industry.

As a proud Gen Xer and lover of bad 1980s pop, I am reminded of that song, “The future’s so bright, I gotta wear shades.” So I’m putting on my sunglasses and moving forward.

[Read a letter from Sharon]