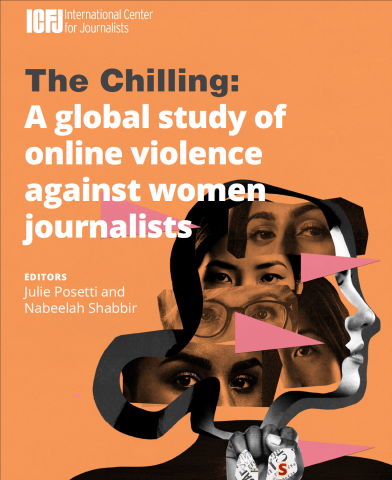 With the support of UNESCO, the International Center for Journalists (ICFJ) has published a groundbreaking, book-length global study on online violence against women journalists, documenting alarming trends and offering solutions to this pernicious problem.

The Chilling: A global study of online violence against women journalists is the most geographically, linguistically and ethnically diverse research ever published on the theme. Publication of the 300-page book, concludes a three-year research project originally commissioned by UNESCO in 2019.

Edited by ICFJ’s Dr. Julie Posetti and Nabeelah Shabbir, it draws on the testimonies of more than 850 international women journalists who were surveyed and interviewed by a team of international researchers led by ICFJ’s research division.

The Chilling is a vital, at times gut-wrenching call to action - one that we cannot afford to ignore. -- Nobel Peace Prize Laureate Maria Ressa

The women journalists who took part in the research said they had been subjected to a wide range of online violence, including threats of sexual assault and physical violence, abusive language, harassing private messages, threats to damage their professional or personal reputations, digital security attacks, misrepresentation via manipulated images and financial threats.

The Chilling illuminates the evolving challenges faced by women journalists dealing with prolific and/or sustained online violence around the world, including the ways that disinformation and the impact of the COVID-19 pandemic deepen the problem. It also pays careful attention to the nature of intersectional abuse – for example, where racism and bigotry overlap with misogyny as features of online attacks.

The full study includes the following:

Over the course of the research period leading up to this study's publication, UNESCO and ICFJ published a report presenting the findings of a global survey (2020), a research discussion paper (2021), and two individual chapters extracted from this study: What More Can News Organizations Do to Combat Gendered Online Violence? (2022) and Assessing Big Tech’s Response to Online Violence Against Women Journalists (2022).

Top findings from the 2020 global survey

The report is also available in Arabic, French and Spanish.

Note: If you've found this content distressing or difficult to discuss, you're not alone. There are resources available to help. Start by exploring the resources from the Dart Center for Journalism and Trauma, and please seek psychological support if needed. Your privacy is of the utmost importance to us and we have worked with the University of Sheffield’s Centre for Freedom of the Media (CFOM) to ensure that this research meets the highest ethical standards.

We are supported in our work by the following project partners: the Ethical Journalism Network (EJN), the Dart Center Asia Pacific, and the International Association of Women in Radio and Television (IAWRT).

*From an original sample of 1,210 self-selecting international survey respondents, 901 were accepted as valid detailed analysis. This report is based on a gender-disaggregated analysis of the 714 women-identifying respondents.

More News
In partnership with