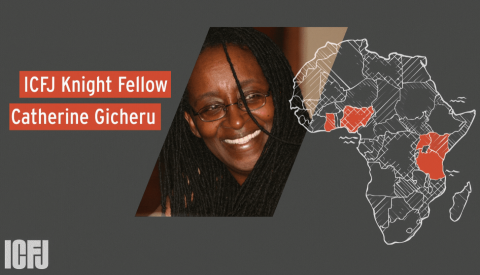 She was the first woman news editor of the Nation Media Group, later serving as the founding editor of The Star in Kenya. That’s when Catherine joined the ICFJ network, as one of a cohort of top news editors we brought to the U.S. to learn from their peer newsrooms.

Today, as an ICFJ Knight Fellow, Catherine has embarked on a new challenge: She is building a cadre of women journalists in Africa who, like her, aim to shatter glass ceilings in newsrooms long dominated by men. As a result, these outlets are delivering better, essential news coverage to their communities.

Catherine founded the Africa Women Journalism Project (AWJP) in 2020 in collaboration with ICFJ to champion reporting that examines the reality of women’s lives. Across Ghana, Kenya, Nigeria, Senegal, South Africa and Tanzania, AWJP journalists and data analysts have produced more than 100 stories on under-reported subjects, from the abduction of women and children for ransom in Nigeria to the impact of the pandemic on domestic workers in Tanzania.

“The women in our network are the entry point to try and make changes in their newsrooms -- to not only change attitudes, but the way they are doing things,” Catherine said. “We want to show that when you do not talk to the 51% of the population that are women, then you are losing and it never makes business sense.”

We want to show that when you do not talk to the 51% of the population that are women, then you are losing and it never makes business sense.

Coverage by and for women is vital. Women journalists and editors bring insights that enrich reporting, allowing news outlets to do what journalism is meant to do: expose injustice, inform communities and, in the best of cases, make things better for more people. In addition to supporting trailblazers like Catherine, we at ICFJ are fighting pervasive online violence that is designed to silence women’s voices. Catherine herself experiences these chilling attacks – she is one of the hundreds of journalists who have taken part in our research on the topic, affecting three out of four women we surveyed. (Learn more about how we are developing an early warning system to help targeted journalists.)

As Catherine and AWJP look to the future, they are expanding their network to more Francophone countries, with backing from the Ford Foundation. We are proud to support her, the women leaders who are part of AWJP, as well as other talented journalists in Africa, where ICFJ has long worked. Our programming has provided thousands of journalists, from novice to veteran reporters, with training and other resources to surface important stories, strengthen their skills and reach more people.

The journalists in ICFJ’s global network are truly inspiring. In nearly every corner of the world, they are fighting disinformation and working to ensure that communities get the news they need to make informed decisions. Thank you for all you do to help us support these journalists and their vital work.