Thanks to generous support from the Dow Jones Foundation, ICFJ is able to bring cutting-edge reporting tips and storytelling techniques to thousands of webinar participants across the globe. Over the past six years, we’ve grown our audience size and now reach more than 50,000 journalists, bloggers and students annually. 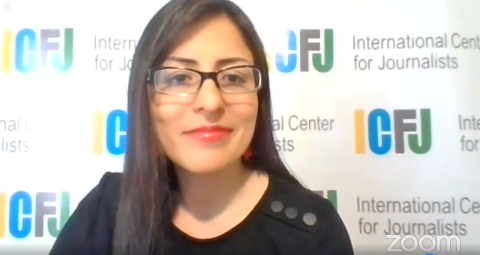 This year, we deeply appreciate Dow Jones’s support for the Global Health Crisis Reporting Forum. In response to the COVID-19 pandemic, ICFJ created the Forum to help journalists provide accurate, life-saving information to their communities. The foundation's backing has been crucial to the success of the initiative - now running in five languages and reaching tens of thousands of journalists in more than 100 countries.

How to Combine Forces to Combat Misinformation, December 23rd, 2019

The webinar will feature two experts: Astudestra Ajengrastri, Senior Broadcast Journalist - Social Media Editor at BBC News Indonesia and a former ICFJ TruthBuzz Fellow, and Lilia Zaharia, a senior reporter at the Moldova Association of Independent Press (API) and Editorial Director of ProFact Moldova, a program that mobilized journalists to apply investigative techniques to identify and counter sources of false information online. They will share their experiences and insight into how other newsrooms and journalists can work together to combat misinformation.

Learn more and register for the webinar.

In Indonesia, Ajengrastri worked closely with the Cekfakta Coalition - a collaborative effort of 24 online newsrooms - to tackle the spread of disinformation during the 2019 presidential campaign. Cekfakta organized a live fact-checking operation during the presidential debates. This work convinced at least one candidate to admit he was less likely to make false claims knowing they would be debunked.

In Moldova, Zaharia and the ProFact network investigated false stories spread in Moldovan media, publishing credible responses through the local fact-checking site StopFals and other independent media outlets. Through a partnership with local “troll-hunters” and researchers in the UK, the team exposed some fake social media accounts spreading false information, revealing connections between misinformation and major political parties in the country.

Recent election campaigns in Brazil and India included extensive use of WhatsApp and other private messaging platforms to spread rumors and false information to the millions of users of these platforms. We invited two experts from these countries to share their experiences and insights from those campaigns: Tai Nalon, Executive Director of Aos Fatos, a fact-checking outlet in Brazil and Shalini Joshi, who works on the TruthBuzz program for the India-based PROTO. Watch the full webinar here.

When covering complex, ongoing stories, such as outbreaks of violence and criminal trials, journalists typically have far more information than they can squeeze into the average daily news article. The result: a series of oftentimes repetitive, one-off stories that may ignore or oversimplify the bigger picture. Structured journalism is a new storytelling form that breaks out of this pattern. In a structured journalism project, journalists should think of each daily story as an entry in a database, not a standalone piece of content. Daily stories are compiled thematically and categorized so that they can be easily filtered. Readers can explore this interactive content database to reveal trends and patterns in the news. The goal: strengthen the newsrooms’ credibility with audiences by showcasing a body of work around a subject and giving readers the ability to easily verify conclusions. ICFJ Knight Fellow Ritvvij Parrikh explained how to design and manage such projects. Watch the full webinar here.

When journalists around the world collaborate on investigations, they have the potential to illuminate how issues affect people in multiple countries and to trace the flow of money and goods across borders. However, coordinating these cross-border journalism teams can be a challenge as it requires navigating cultural differences and data standards and organizing virtual meetings across time zones. ICFJ Knight Fellow Jacopo Ottaviani shared tools and leadership strategies that have been particularly effective in managing cross-border teams at ICFJ partner Code For Africa, the continent's largest network of civic technology and data journalism labs. Watch the full webinar here.

Health journalism helps people make important decisions about their own well-being and hold governments and corporations accountable for their policies. However, it can be challenging to locate the health data that drives these stories and to present them in ways that resonate with wide audiences. ICFJ Knight Fellow Fabiola Torres showed reporters where to find publicly available data, how to build clean, reusable databases, and how to go beyond the numbers to humanize health reporting. Watch the full webinar here.

ICFJ Knight Fellow Pedro Burgos presented ways to help newsrooms strengthen a culture of impact and offered alternative metrics to measure story performance beyond just analytics. If media can be better equipped to discover, track and communicate their impact on public institutions, discussions by influential people and everyday citizens, then they will be better equipped to show the value of their journalism and build loyal audiences, Burgos contends. As a Fellow, Burgos is enhancing his Impacto platform, a set of tools he developed with the support of Google News Lab. He is also creating methodologies to guide media on how to track and communicate their impact. He previously worked as reporter and editor covering media and technology for several publications in his native Brazil. Watch the full webinar here.

Pushing for more innovative storytelling can be challenging for newsrooms, especially when there isn’t enough time or resources. However, there are plenty of free digital tools that can help journalists introduce data visualizations and other more creative ways of telling stories. During this webinar, ICFJ Google Fellow Irshad Daftari and journalist Farah Thakur, representing our media partner IndiaSpend, introduced journalists to five tools that they've found to be particularly useful. These range from Dotmat, a free-to-use data visualizer, to Atavist, a simple way to present digital longform content to Google MyMaps, a highly customizable map building platform. Watch the full webinar here.

Independent digital media are not just producing news — they are generators of change, promoting better laws, defending human rights, exposing corruption and fighting abuses of power. Even though they face many severe challenges, a growing number of these entrepreneurial journalists have developed sustainable — and even profitable — business models. These were among the major conclusions of an extensive new study on Latin American digital media led by ICFJ Knight Fellow Janine Warner. She presented the findings to help participants identify best practices and strengthen their business models as well as their editorial independence. Watch the full webinar in English or Spanish.

The Importance of Collaboration in the Panama Papers Investigation

ICFJ Knight Fellow Chris Roper, International Consortium of Investigative Journalists reporter Will Fitzgibbon, African Network of Centers for Investigative Reporting (ANCIR) Managing Editor Amanda Strydom and former ANCIR editor Khadija Sharife explained how journalists collaborated across borders and time zones on the groundbreaking Panama Papers investigation. The presenters emphasized that the massive size of the Panama Papers leak -- 11.5 million leaked files -- has made journalists realize that they need to be open to collaborating on large-scale, cross-border projects. Another important takeaway was that journalists looking to participate in cross-border investigations need to place a high value on local reporters’ knowledge and networks. Watch the full webinar here.

ICFJ Knight Fellow Christopher Guess led a webinar on how to use “Push,” a customizable iOS and Android mobile app that he developed for media outlets with limited time, money or resources. While a custom mobile news app can cost upwards of $50,000 to develop, Guess’ app can be launched with only a few days of developer time. The app replicates the aesthetic and features, including push notifications and navigable categories, of more the more expensive, custom developed apps used by big publications. Watch the full webinar here.

Practical, Affordable Ways to Use 360° Video in Storytelling

ICFJ Knight Fellow Shaheryar Popalzai demoed practical examples from his work in Pakistan that can help other journalists adopt 360° video. During the webinar, he walked through all of the steps needed to complete a 360° storytelling project, from brainstorming a story idea to shooting to publishing the piece online. Tribune Labs Editor Shayan Naveed also presented during the webinar, explaining how Popalzai and her team collaborated to produce the Pakistan’s first 360° project by a news organization. Watch the full webinar here.